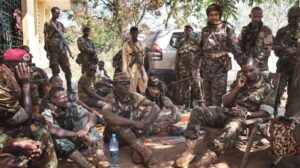 Photo: Marcus Bleasdale/VII
Armed fighters of the supposedly disbanded Seleka alliance still control large swathes of the country[/caption] Already delayed once, the parliamentary and presidential polls – now scheduled for July and August – are provoking a debate over what should come first: national security or democratic process. “The whole UN system and its partners are engaged in supporting this process,” UN Development Programme’s Africa Programme Director Abdoulaye Mar Dieye said last week at the end of a five-day visit to the country. He added that holding elections were an “indispensable condition” for the success of detailed plans drawn up in 2013 by regional leaders to restore democracy to CAR. This roadmap was drafted after a coalition of rebel groups known as Séléka ousted then president Francois Bozizé. Although this coalition has been out of power for a year (and is now known as “ex-Séléka”) thousands of its fighters are still armed and hold sway in six of the country’s prefectures. They have prevented the National Election Authority (ANE) from setting up offices in those areas and in one case even briefly abducted officials who were trying to raise public awareness of the election process. In all, the ANE has opened 83 of a planned 141 offices across the country. In a 5 February letter to the Security Council requesting authorisation for the UN mission in CAR to be boosted by 1,030 soldiers and police, UN Secretary-General Ban Ki-moon noted that “the security situation [in CAR] remains volatile and clashes between anti-Balaka [militias] and ex-Séléka elements continue, while criminal activities aimed at, among other things, controlling the country’s natural resources are increasing.” Ban said the reinforcements would “be especially important for the additional capability to be made available in time to enhance security before, during and after the electoral period…” Within CAR, opinion is divided over whether elections should held soon or be delayed until security improves. Presidential candidate Charles Armel Doubane, also a former minister and one-time ambassador to the UN told IRIN it was important voting took place soon. “I am among those who think that, whatever the will of the people of Central Africa, we cannot hold elections in three or five years, that is to say [only] when we have 100 percent peace,” he said. “The conditions CAR functions under now do not permit it to have full sovereignty over its decisions,” he added, explaining this was because foreign donors were funding the elections. “Whatever happens, we must have elections to put an end to this transition [period].” But for Christophe Gaza-Mbeti, former Séléka spokesperson and government minister, there are more pressing priorities. “Disarmament must take place. Just as an election date is imposed on us, we must also impose on those who impose election dates a date for disarmament. The people of Central Africa demand disarmament,” he told the Diaspora Magazine website. Presidential candidate Jospeh Bendouga asked: “How are we going be able to campaign if people still have guns?” Others also wondered about the urgency of holding elections. A retired civil servant in the capital, Bangui insisted, ““What’s important for us is that first there is peace and security so that people can vote calmly.” On a similar note, a farmer in the western town of Bossangoa told IRIN, “We will vote when the time comes, but what about the people still living under the control of armed groups.” Finance gap Money is one of the biggest problems facing the ANE, and as things stand now the authority is not able to guarantee the election timetable will be respected. “Unless the required technical and financial means are made available very soon, we run the risk of delaying these elections,” ANE Chairman Dieudonné Kombo Yaya told a recent press conference in the capital. Voter registration is already behind schedule. It failed to get off the ground as planned in January and it is not clear when it will start. Kombo Yaya attributed this delay to inadequate security and to the absence of government officials and of necessary administrative documents in much of the country. ANE is a long way from having the 22 billion CFA francs (US$38 million) it needs to run the elections. According to documents obtained from the authority, the European Union pledged 20 million euros ($22.6 million) in January but this has not yet materialized. The African Development Bank has chipped in one billion CFA francs ($1.7 million) and the UN Development Programme has given ANE 100 million CFA francs and a $2 million line of credit. France gave 100,000 euros ($113,000) for the elections in November. This leave the authority with a deficit of around 20 billion CFA francs. After his trip, UNDP’s Mar Dieye said he had “no doubt the elections would be financed.” He added, “Of course, we have to move quickly. A minimum of resources need to be secured to allow enrolment to start. By starting the electoral process, you give people faith that we will succeed.” Sixteen politicians have put themselves forward as candidates for the presidential election, and more are expected to do so in the coming months. *Source irinnews]]>