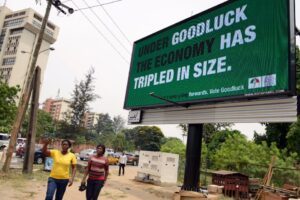 Two women walk past a campaign billboard of Nigeria’s President Goodluck Jonathan and candidate for his re-election for the ruling People Democratic Party (PDP), in the Ikoyi district of Lagos, on February 24, 2015 (AFP Photo/Pius Utomi Ekpei)[/caption] Lagos (AFP) – Nigeria’s politicians are turning to Nollywood film stars, popular musicians and former international footballers to win next month’s election, in a campaign increasingly fought online

Africa’s most populous country and biggest economy goes to the polls for presidential and parliamentary elections on March 28, with gubernatorial and state house assembly polls two weeks later.

Dozens of parties will contest the vote but the main opposition All Progressives Congress (APC) is seen as mounting the first serious challenge to the ruling Peoples Democratic Party (PDP).

An Afrobarometer poll published on January 27 before the initial February 14 election date was pushed back six weeks on security grounds put the two parties neck-and-neck at 42 percent each.

“The PDP and APC are not taking chances. They are using every available platform to woo the electorate,” he told AFP.

Both main parties are still making use of traditional media such as radio, television, newspapers, billboards and posters.

But they have also taken to social media in a big way, with Nigeria witnessing an explosion in mobile phone subscriptions, including smartphones.

For the APC and its candidate, former military ruler Muhammadu Buhari, the popular traditional musician Wasiu Ayinde Marshall has been a regular at campaign rallies in the southwest

On radio and television, specially composed songs and jingles extolling the virtues of political candidates are rarely off the airwaves.

In Lagos, APC governorship candidate Akinwunmi Ambode is fighting his PDP rival Jimi Agbaje as much for airtime as on the campaign trail. [caption id="attachment_16660" align="alignright" width="242"] 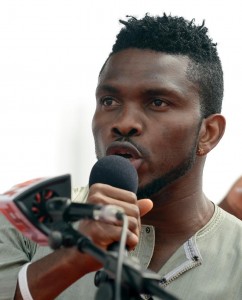 Omolara Olaosebikan, of Quadrant Communications, a public relations firm involved in some of the campaigns, said technology was changing the face of political advertisements in Nigeria.

“It’s digital revolution at play. There is no doubt that this year’s election will remain the most competitive in history and the parties do not want to be beaten to the game,” she said.

For the first time, politicians — particularly those from the ruling party — have realised they can no longer take the electorate for granted, she said.

“Everybody is leveraging on digital advertisements to woo the electorate,” Olaosebikan added.

“It’s no longer enough to rely on insertions in newspapers or buy prime time for commercials. Who has the time to read newspapers or listen to radio and watch television anyway?”

Olaosebikan said advertisers now prefer online and social media to conventional media because of its low cost and immediacy.

“But it’s not the case with the social media.”

Nigeria, where noisy discussion about current affairs is commonplace, not surprisingly has an enthusiastic and vocal community of Facebook and Twitter users.

The BBC said in an online article last September that politicians have even recruited unemployed young people who ordinarily would have been used to physically intimidate voters for a cyberwar.

Armed with laptops and smartphones, they bombard online articles with positive comments for their political sponsor and criticise his opponents.

“In Nigeria, some 40 million people are said to be on social media,” said Olaosebikan. “This is a huge population that can be of huge electoral value to politicians.”

But with just over a third of Nigeria’s 178 million people illiterate, parties still have to rely on visual and aural cues to get their message across.

As a result, the PDP’s umbrella and the APC’s wicker broom are printed everywhere, from T-shirts and caps to consumer items such as rice and salt which are distributed as gifts to supporters.

Given the personal nature of Nigerian politics, where patronage is paramount, and this year’s closely fought election race, smear campaigns are widespread, particularly against Buhari.

Communications specialist Olatunji Dare, however, believes that newspapers, which are currently stuffed with political propaganda adverts every day, should not be part of the campaign.

“The front page is a newspaper’s chief asset,” Dare wrote recently in The Nation, an APC-backed newspaper.

They should not be used to peddle “transparent falsehoods or hate or religious bigotry to anyone who can pay for it”, he added.