The best goal, the best game and the biggest surprises after an eventful month in Equatorial Guinea was ended with Ivory Coast’s shootout success over Ghana

Team of the tournament

It would be churlish not to praise the winner, Ivory Coast, even if they stumbled over the line. They had waited 23 years for this and, mainly for their performances in the games against Cameroon, Algeria and DR Congo, could justifiably be called the best team. Equatorial Guinea deserve a mention too – their progress from the group stage was exhilarating and played out to remarkable levels of volume, and not even their fortunate win over Tunisia could completely silence the feelgood story. An unusually technical, mobile team of overachievers were fascinating to watch but in falling short against Ghana, their story became overtaken somewhat by off-pitch events.

Player of the tournament

Ghana’s Christian Atsu won the official award and probably deserved it overall. He was the best attacking player on display in the final – even if that was not saying a lot – and produced coruscating performances against Guinea, against whom he scored a remarkable angled 30-yarder, and Equatorial Guinea too. Can he push on and produce the goods for Everton at long last? Honourable mentions here go to Chancel Mbemba, the Anderlecht and DR Congo midfielder, and the veteran Equatorial Guinea holding player, Ivan Zarandona, whose languishing in the Hong Kong league seems a thing of the imagination.

Game of the tournament

Despite a sometimes tedious group stage there ended up being a few contenders. Algeria’s 3-1 win over South Africa was rollicking good fun after the interval, even if error-strewn, while the quarter-finals were uniformly fun and DR Congo’s 4-2 comeback win over Republic of the Congo – another game where the action came in the second-half – was breathless stuff. Ivory Coast’s 3-1 quarter-final win over Algeria was the best example of two top sides going blow for blow, though, and a tight game that grew in quality was far closer than the scoreline suggests. It was a match that would have been worthy of the final and, not for the first time, you cursed the skewed nature of the draw.

Goal of the tournament

For drama, timing and did-he-really-just-do-that, Javier Balboa’s free-kick winner for Equatorial Guinea in the controversial quarter-final against Tunisia is a clear winner. There were suggestions that Aymen Mathlouthi had been too slow across his goal but this was a wonderfully-placed free-kick, taken in an air pregnant with expectant tension, and sparked levels of pandemonium barely credible to even the most seasoned observers. Other honourable mentions go to Atsu, Bakary Sako – whose left-foot half-volley against the Ivorians was a delightful study in technique – and two of an entertaining South African side. Thuso Phala was on the end of the flowing team goal against Algeria and Mandla Masango scored a thudding volley against the Ghanaians, but both would be in vain.
Regret of the tournament
Advertisement

Although the host nation’s progress to the semi-finals was exuberantly received there had been a degree of unease at one or two of their games. The group fixture against Burkina Faso saw skirmishes between police and fans at the gates and it only took a tiny skip of the imagination to see that things might not have gone off smoothly if the teams’ fates had been reversed in the Tunisia quarter-final. But there was still no foreseeing the extent to which things degenerated in the last-four match with the Ghanaians: however you analyse the root cause of the supporters’ actions, it was an episode that will cloud memories of the past few weeks and, if Caf have any self-awareness, should lead to some soul-searching about the chain of events that led to the competition being held here at all.
Revelation of the tournament

The Equatoguinean league rarely crosses the radars of even the most hardened African football scouts but perhaps a few might attempt to negotiate the country’s labyrinthine visa process and head to a Deportivo Mongomo game soon. That is if Felipe Ovono has not convinced somebody to take the plunge already. The home nation’s goalkeeper is just 21 and stands only slightly taller than 6ft, yet he was the stand-out goalkeeper here and a figure who commanded attention even when the freedom with which his outfield team-mates sometimes played was a more obvious draw.

Ovono is laudably brave and made a speciality of claiming balls he had little right to contest – generally to a backdrop of near-hysterical cheers. It was unfortunate that his one major misjudgment resulted in a penalty and goal for Ghana in the semi-final, but Ovono mixes the exuberance of youth with a genuine sense of command and it would be interesting to see how he would fare higher up the football food chain. But he did not make the …
… Save of the tournament

Darren Keet will not look back on this competition with much fondness. The South Africa goalkeeper was relieved of first-choice status after their first game, against Algeria, after the north Africans overturned a deficit to win 3-1. Nitpickers could fault Keet for Algeria’s first two goals and he was more squarely to blame for the third, when Islam Slimani’s shot went right through him. So it will be lost to history that Keet had made a thrilling double save just moments after Tokelo Rantie had missed the penalty that would have put South Africa 2-0 up. An instinctive save from Slimani’s backheel was good but his reaction to the follow-up, tipping the same player’s rebound on to the bar from point-blank range, was genuinely brilliant. The Kortrijk player will, at least, always have that.
Feelgood moment of the tournament

It came right at the very end. Boubacar Barry is far from the biggest name of Ivory Coast’s “golden generation”, and perhaps it is generous to bracket him in that category at all, but the 35-year-old goalkeeper has been there through the good and the bad times – including two final defeats – and here he served up the best of all.

Barry, who plays for Lokeren in Belgium and has been a derided figure down the years, travelled here as second choice and was not expected to appear, but an injury to Sylvain Gbohouo gave him a chance in the final and perhaps the script had been written in advance. At the end of a see-sawing penalty shoot-out, a seemingly injured Barry picked himself up to save his counterpart Razak Braimah’s penalty and then coolly convert his own. You smiled spontaneously as he wheeled away and then reflected that after another tournament in which Ivory Coast’s bigger names had struggled for consistency and form, this might have been the best way for them to win.

Disappointment of the tournament

Much was expected of Paul Put’s Burkina Faso, runners-up last time and placed in the kinder half of the draw here. But despite creating enough chances in their first two games to win several groups, they came away from those with just one point and then lost 2-1 against Congo to seal their fate. Perhaps they were just unlucky; perhaps they are only a competent centre-forward away from being a potent force for the long-term; perhaps they just are not as good as their 2012 performance suggested. If they were the biggest on-pitch shame, the events of Equatorial Guinea’s semi-final against Ghana probably need little further recounting here, but will colour many perceptions of the tournament.

Team hotel of the tournament

This award should be dedicated to Claude Le Roy, the Congo coach who is always a pleasure to engage in football conversation but this month reached Mastermind levels of cogniscience with the sometimes sub-standard accommodation arrangements that his team and others had to tolerate. It was in fact the Democratic Republic of the Congo who ended up with the weirdest arrangement, in a Butlins-esque resort next to Bata’s airport. Butlins holds a certain appeal to some but the cavernous dining hall in this venue, peopled by various ne’er-do-wells who you suspected might benefit from the proximity of flights out, was a slightly unsettling place when an ebullient DR Congo squad was not sitting down to eat.

A shout out, too, to the Vistamar in Bata and the Hilton in Malabo. Le Roy was not wrong – Caf and their associates had definitely made sure they were well looked after.

Dubious claim to fame of the tournament

It is always nice to feel that you have contributed to another’s success and the Ipswich Star newspaper seemed proud that Suffolk constabulary had been prior owners of the helicopter used to disperse supporters in the Equatorial Guinea v Ghana game. How fuzzy the glow would have been if the chopper, whose manoeuvre was frightening even to those watching at a distance, had made the slightest of wrong moves is probably a question best left alone.

Near miss of the tournament

Journalists filed into what looked a respectably proportioned mixed zone in the period between Equatorial Guinea v Congo and Gabon v Burkina Faso on the opening day, readying themselves for the obligatory quote-gathering scrum. They were then mired in a different kind of crush as a crowd of Gabon fans, attempting to enter the stand via a narrow adjacent staircase, exerted enough pressure on the flimsy plastic screens to send some of them tumbling and leave this reporter – along with others – scrambling away towards safety. The chaos eventually died down, at the cost of any post-match interviews, but fortunately this was one security issue from which organisers learned.

Venue of the tournament

If this was awarded for weirdness alone, Mongomo would take the crown most years. The vast Italianate basilica, modelled on St Peter’s in Rome, is odd enough and the numerous brand-new, empty edifices – a library, museum and college among them – that pepper the landscape around this small jungle town speak of an ambition that may or may not be realised. And when you have had enough of that, the quickest way back to Bata if you are in luck – or have a convenient contact in the army – is an entirely empty dual carriageway, not open to the general public, carved through dense jungle. But Estadio de Bata, comfortably the biggest stadium here, was probably the best in which to watch football – achieving the rare balance of being both modern and able to hold in 37,000 fans’ worth of noise. 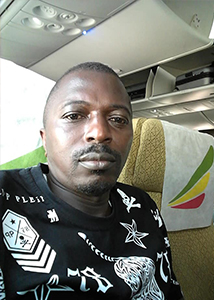