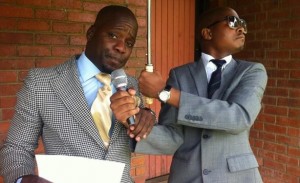 Photo: P.O BOX/Facebook
P.O BOX[/caption] Many Zimbabweans are going crazy with the comical videos currently circulating on social media platforms mainly Facebook and Whatsapp of two guys namely Bhutisi and Boss Kedha. The duo that have taken the entertainment industry by storm with their jokes that tackles social issues is using the name PO Box TV. Having introduced themselves late last year, the duo is likely to ride on a wave of unprecedented popularity since most of their acts have become household jokes. They introduced themselves with the video “Boys dzeTonaz” where they mock Zimbabweans who are living in South Africa. According to the video, Zimbabweans staying in South Africa boast that they are living a lavish life across the Limpopo when things are not the same on the ground. Bhutisi acts as the one staying in South Africa, he brags about South Africa’s good food and infrastructure but from the look of things he is hungry without even bus fare to return back. They touched on prison life on “Mubhanditi Bhutisi” where they hailed Zimbabwe Prisons and Correctional Services for the rehabilitation of prisoners who are taught life skills inside the prison so that they will be able to fend for themselves when they are released. Their second video “Chaunoda chii” is the one that shot them to fame. They ask each other what they prefer between vegetables and beef, Dynamos and Highlanders, Soul Jah Love and Seh Calaz then Mazoe and Cream Soda. Another humorous episode was “Usandisiye” where Bhutisi cries saying he cannot live without his friend Boss Kedha. They also touched on some political ills on Mayor Bhutisi where they depict some of the things politicians do, skinning the backs of the poor for their own personal benefits.

Their latest offering, “Anotenga Here”, is pregnant with meaning and has left people guessing on what the duo were up to. They start their conversation saying in January people do not struggle to get food since there will be a lot of fruits like mangoes, and there will be pumpkin leaves but they shift to a new topic saying people are refusing empty bottles for exchange with money or anything. Efforts to get a comment from the man behind the Bhutisi character, Admire Kuzhangaira, hit a snag after the later said they were not at liberty to talk to the media. “I am sorry but according to our agreement as a group, we agreed that we have to give time to our work to talk on its own before we engage the media, but if you get hold of us around February I am sure we will give you all the details you want, for the mean time we just want people to see and give us thei feedback,” he said. According to PO Box’s facebook page, the group is “dedicated to educate, entertain and provoke thought through skits, mockumentaries and tabloid news”. It is still to be seen if the group will surpass the standard set by Uncle Ritchie of the “Zviri Kumbofamba Sei” fame. *Source allafrica]]>