Zimbabwe: Indigenisation Law to Be Amended 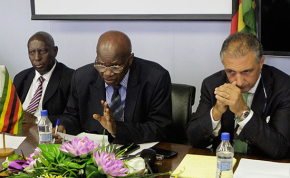 “We need fresh money in this country and FDI is one clear source of attracting fresh money into the economy. What I am saying is that, I would have been happier if the clarity had been done from a ministry point of view, rather than delegating it to the line ministry,” said Cde Nyambuya. Minister Chinamasa defended the proposed amendments saying line ministries were best suited to do the job but said what was important was for Government to guard against corruption by publicising ministries’ decisions in that regard. Chief Fortune Charumbira weighed in saying foreign-owned firms were naturally against indigenisation. “But I have one apprehension which is that, in the previous arrangement, there were some allegations and insinuations that the whole issue of indigenisation was characterised in some cases by corruption and I think it is in the way it was being done. “When we do this, I doubt if this might take away the issue of possibilities of corruption. We have just moved from one ministry to another ministry but as I am saying, it is good that we move to the line ministry but within that ministry, we need checks and balances. “That is the critical issue. So that they do not have to approach a particular director or officer and say, can we indigenise and then they say, no, not yet. The particular officer or director may end up being corrupted and end up saying, no, we cannot indigenise now but let us do that after 10 years or 20 years,” said Chief Charumbira. He said it was critical that Government comes up with measures to guard against corruption if the indigenisation and economic empowerment drive was to succeed. *Source allafrica/The Herald]]>
0