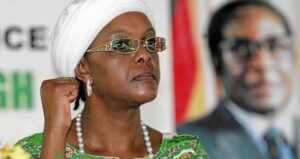 Grace Mugabe, Zimbabwe’s First Lady. Photo©Reuters[/caption] Zimbabwe President Robert Mugabe’s ruling Zanu PF party has reacted angrily to reports that his wife is behind the mass eviction of families from several farms to make way for a private game reserve. Armed police last week began evicting close to 800 families from Manzou Estate east of Harare.The estate is near a number of properties grabbed by First Lady Grace Mugabe where she has built an orphanage. She has also built an elite primary school and plans to build a private secondary school as well as a university named after her husband. The evictions have been condemned by civil society and opposition parties who have accused the First Lady of being greedy. Zimbabwe Human Rights Commission chairperson Alec Muchadehama said the evictions were unlawful. “First, the removal is unlawful, for the reason that the Constitution says there should be no eviction without a valid court order,” he said. “It’s unfortunate because here you are dealing with human beings. You can’t treat them like that. This is a serious violation of human rights.” However, Zanu PF said the reports linking the First Lady to the evictions were malicious. “We view this relentless onslaught on the good name of Dr Mugabe as politically-motivated and call upon all those who are behind this sordid campaign to stop it forthwith,” the party said in a statement. “We are especially distressed by the latest claim, which is completely and utterly baseless, that Dr Grace has any entitlement to or anything to do with the ongoing eviction of people from Manzou Farm, which authorities say was designated not as a residential area but a national heritage site several years ago”. The First Family already owns several farms that were grabbed from white commercial farms during Mugabe’s controversial land reform programme. Late last year, Grace entered mainstream politics and was quickly elected to lead the ruling Zanu PF’s women’s wing shortly after having being awarded a PhD from the University of Zimbabwe with surprising speed.