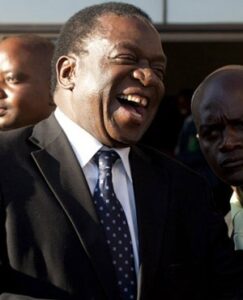 Emmerson Mnangagwa. (File: AFP)[/caption] Cape Town – Zimbabwean government will soon intensify its land grabs, targeting the country’s remaining white farmers and those with multiple farms, acting president Emmerson Mnangagwa has reportedly said. According to the Newsday, Mnangagwa said there was need to resuscitate the country’s agro-based economy so that Zimbabweans could have food on the table. “Those with multiple farms, we will take them, the few whites on farms, we will look into that and those with big farms, we will cut to size,” Mnangagwa was quoted as saying. Land policy U-turn Mnangagwa’s remarks come a few weeks after Minister of Lands and Rural Resettlement Douglas Mombeshora announced that the Zimbabwean government had made a U-turn in its land policy, allowing farming joint ventures between new black farmers and former white commercial farmers. But the country’s Commercial Farmers’ Union (CFU), which is largely made up of white former farmers expressed scepticism over government’s sincerity, with the spokesperson Hendrik Olivier saying white farmers were still hesitant to enter into partnerships with locals. Hendrik said the policies had been inconsistent and sometimes non-existent over the past 15 years. Last year President Robert Mugabe made headlines when he vowed that whites would never be allowed to own land in Zimbabwe. Mugabe at the time also warned black Zimbabweans against partnering with whites in agriculture deals. Mugabe and his Zanu-PF party launched the land reforms in 2000, taking over white-owned farms to resettle landless blacks. Mugabe said the reforms were meant to correct colonial land ownership imbalances. At least 4 000 white commercial farmers were evicted from their farms. The land seizures were often violent, claiming the lives of several white farmers during clashes with veterans of Zimbabwe’s 1970s liberation struggle. Critics of the reforms have blamed the programme for low production on the farms as the majority of the beneficiaries lacked the means and skills to work the land. *Source news24]]>