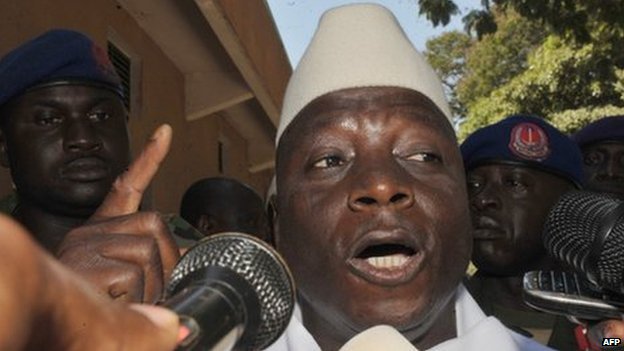 President Yahya Jammeh has been in power for two decades[/caption]

The Gambia’s President Yahya Jammeh has returned to the country after a reported coup attempt, sources say.

Heavy gunfire was heard near the presidential palace in Banjul on Tuesday but officials say the military takeover was thwarted. Details remain sketchy – an official told the BBC that everything had now returned to normal. Mr Jammeh seized power in the tiny West African nation in 1994, and is accused of not tolerating any opposition. Journalist Omar Wally told the BBC’s Focus on Africa programme that businesses had reopened, after closing on Tuesday. He said military checkpoints had been set up at the Denton Bridge which links the island capital to the mainland and cars were being searched. The pro-opposition Freedom newspaper reports that four people were killed, including the alleged ringleader Lamin Sanneh, a former head of the presidential guards, but this has not been confirmed. Mr Jammeh was said to have been in either France or Dubai during Tuesday’s unrest but different sources agree he has now returned. *Source BBC]]>