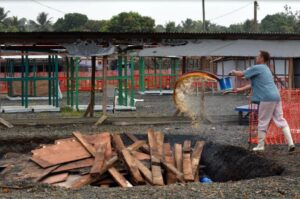 A Doctors Without Borders agent prepares to burn pieces of a dismantled tent on January 27, 2015 after the first section of the ELWA III Ebola Management Center in Monrovia was decomissioned (AFP Photo/Zoom Dosso)[/caption] Monrovia (AFP) – A potent symbol of the nightmare enveloping west Africa at the height of the Ebola outbreak, the ELWA-3 treatment centre is being dismantled and incinerated bit by bit as the region emerges from catastrophe.

The largest Ebola unit ever built opened in the Liberian capital Monrovia with 120 beds on August 17 but was immediately overwhelmed, with staff forced to turn patients away at its gates, despite more than doubling its capacity.

Five months later to the day it registered no patients at all for the first time, and staff this week marked a drastic retreat of an epidemic which has killed thousands by dismantling and burning the first tent put up at the clinic.

“The number of cases has decreased significantly — we are down to five confirmed cases in Liberia,” said Duncan Bell, the field coordinator in Liberia for Medecins san Frontieres (MSF), the medical aid charity at the forefront of treating victims of the outbreak.

“In line with this development we think it was appropriate to reduce the treatment centre. Today we have 60 beds and at the end of February we hope to go down to 30 beds. This does not mean that we are closing ELWA-3 — we are just reducing the capacity.”

“We still have the capacity to scale up to 120 beds within 24 hours if the need arises,” he added, as staff carried wooden planks and canvas to a large fire nearby.

The worst outbreak of the virus in history has seen Liberia and its neighbours Guinea and Sierra Leone register almost 9,000 deaths in a year.

Soon after it opened, staff at ELWA-3 were struggling to screen new arrivals, care for admitted patients or safely remove dead bodies and transport them to the crematorium.

But Liberia and its neighbours Sierra Leone and Guinea have reported huge progress on stemming the spread of Ebola since the summer, when the joint tally was several hundred new infections a week.

Liberian Commerce Minister Axel Addy told reporters in Geneva on Monday that 12 of Liberia’s 15 counties had reported no new cases, adding: “We’ve made a tremendous leap.”

He said the crisis had cost Liberia $93 million (82 million euros) in lost revenue, with the key mining sector coming “to a grinding halt”.

Bell said the downsizing of ELWA-3’s capacity went hand in hand with a reduction in workers on the ground, noting that MSF staff had performed an “incredible job”.

MSF said in its latest crisis update on Monday it was treating just two patients in ELWA-3, a huge tented field clinic put up on the grounds of a missionary hospital.

Those were among just over 50 patients at MSF’s eight Ebola units across Guinea, Liberia and Sierra Leone.

The charity’s busiest Ebola management centre is currently the Prince of Wales centre in Freetown, with 30 patients as of January 24.

Children trickled back to school last week in Guinea, where the Ebola epidemic broke out in December 2013 and teaching is due to resume in neighbouring Liberia next week. 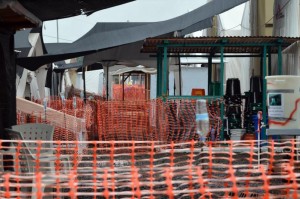 Doctors Without Borders staff work to dismantle tents on January 27, 2015 after the first section of the ELWA III Ebola Management Center in Monrovia was decomissioned (AFP Photo/Zoom Dosso)[/caption]

Classrooms in both countries have been provided with health kits containing chlorine, thermometers and soap, while teams will monitor students to detect possible infections.

Mali, which along with Senegal and Nigeria had a minor Ebola scare, was able last week to declare itself Ebola-free after 42 days without any new cases.

Senegal and Nigeria had previously already done so.

“This decline is an opportunity to focus efforts on addressing the serious weaknesses that remain in the response,” said Brice de la Vingne, MSF Director of Operations.

“We are on the right track, but reaching zero cases will be difficult unless significant improvements are made in alerting new cases and tracing those who have been in contact with them.”

He warned that just a single new case could be enough “to reignite an outbreak”.

“Until everyone who has come into contact with Ebola has been identified, we cannot rest easy,” he said.

The African Union plans to launch an Ebola fund and disease control centre, officials in Ethiopian capital Addis Ababa said on Wednesday, as aid agency Oxfam warned leaders needed to keep their promises to boost healthcare systems on the continent.