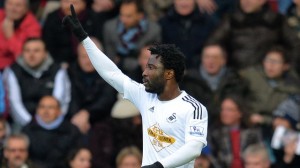 Manchester City have completed the signing of Swansea City striker Wilfried Bony in a deal that could be worth up to £28m.

Bony has agreed a four-and-a-half-year deal at Etihad Stadium through to 2019 and will wear the number 14 shirt.

“It’s a great feeling for me, it’s a big honour to be here and it’s a great challenge,” the 26-year-old said.

The two clubs agreed the terms of the transfer at the weekend, with £25m cash up front and a further £3m in performance-related add-ons.

The deal makes Bony one of the most expensive African footballers in history.

Bony is on international duty with Ivory Coast at the Africa Cup of Nations and could potentially have to wait until mid-February before he can make his City debut.

“As a player it’s always good to be part of one of the biggest clubs in the world and it’s a good opportunity for me to be in that situation now – I’m really proud,” Bony told Manchester City’s website.

“I felt excited to wait for this moment and now it’s come, it’s fantastic.

“I think it’s a great decision for me – Manchester City are in the Champions League. It’s a motivation for me to give my maximum to be in that place.”

City boss Manuel Pellegrini added: “He is an intelligent footballer who has skill and power. His goals record has been excellent since he came to England.

“He adapted very quickly to the game here and I think he will settle in at City quickly. We now have four top-class strikers and I am looking forward to seeing them work together.”

Swansea earlier criticised the Ivory Coast Football Federation for claiming the deal had gone through before either club had announced it.

But a Swansea spokesman said the Ivory Coast “have no right to comment”.

Swansea later confirmed the deal in a statement  that thanked Bony “for his superb service to the club”.

Bony scored 25 goals in all competitions in his first season at the Welsh side and has scored nine goals so far this term.

The fee for Bony, who has also scored 11 goals in 32 games for the Ivory Coast, is almost double Swansea’s previous record sale of Joe Allen to Liverpool in August 2012.

CAR: The search for justice