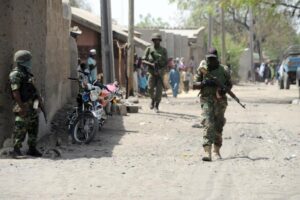 Soldiers walk on April 30, 2013 in the street in the remote northeast town of Baga, Borno State (AFP Photo/Pius Utomi Ekpei)[/caption] United Nations (United States) (AFP) – The UN Security Council urged central African countries on Monday to step up plans for a multinational force to fight Boko Haram, in its first overall response to the threat posed by the Nigerian jihadists.

The council issued a 13-point statement strongly condemning attacks by Boko Haram, in particular those involving children used as suicide bombers, and demanded an end to the violence.

On the eve of a key meeting in Niger of regional leaders, the 15-member council urged Nigeria’s neighbors to advance planning for the deployment a multinational task force to drive out Boko Haram.

Chad is set to contribute a sizeable contingent to the force along with Cameroon, Niger, Nigeria and Benin.

The multinational force has been under discussion since last year, but divisions over the scale and scope of its operations have slowed down the deployment.

The statement from the council came as Boko Haram fighters seized scores of hostages in a raid in neighboring Cameroon on Sunday.

About two dozen hostages were later released but the attack compounded fears that Boko Haram was ramping up operations beyond Nigeria’s borders.

The council expressed “deep concern that the activities of Boko Haram are undermining the peace and stability of the west and central African region,” said the statement presented by Nigeria.

The statement was the first adopted by the council on the threat posed by Boko Haram, which is on the UN terrorist list. Previous statements focused on condemning specific attacks.

The council demanded that Boko Haram “immediately and unequivocally cease all hostilities and all abuses of human rights and violations” in the presidential statement.

It accused Boko Haram of carrying out kidnappings, killings, hostage-taking, pillaging, rape, sexual slavery and recruitment of child soldiers since it launched its campaign in 2009.

Diplomats said the statement pointed to a shift from Nigeria which has shied away from discussing Boko Haram even though it is one of the 10 non-permanent members of the council.

The council statement urged regional leaders to “undertake further planning toward the sustainable, viable and effective operationalization of the Multinational Joint Task Force.”

It urged the African countries to “identify the means and modalities of the envisaged deployment, especially in the areas of intelligence sharing and joint operations.”

The advocacy group Avaaz had launched an online petition on Friday, signed by 725,000 people, to press the Security Council to hold an emergency meeting on the Boko Haram crisis.

“Boko Haram has butchered its way into the global spotlight and finally the Security Council is reacting,” said Alice Jay, campaign director for Avaaz.

“All eyes are now on Nigeria, its neighbors and the international community to put words into comprehensive action to stop 10-year-olds being strapped to bombs or kidnapped in the night.”