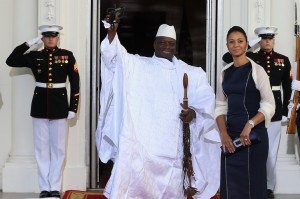 Gambian President Yaya Jammeh[/caption] WASHINGTON — The U.S. charged two Americans with attempting to overthrow Gambia’s government in a failed coup last week, including a Texas property developer who allegedly planned to install himself as the country’s leader. Cherno Njie, the Austin, Texas-based developer, led and financed the effort to oust Gambian President Yahya Jammeh, an agent from the Federal Bureau of Investigation said in an affidavit. After it was put down by Gambian government soldiers, one of the alleged conspirators, Papa Faal, a dual American and Gambian citizen living in Minnesota, fled to Senegal, where he turned himself in at the U.S. Embassy. He then explained the plot to the FBI, according to the affidavit, which the Justice Department released on Monday as it announced the charges. Both men are charged with violating the Neutrality Act, a law that dates from 1794 that makes it illegal for Americans to take up arms against a foreign government with which the U.S. is at peace. Both men appeared in federal court on Monday. Information on their attorneys wasn’t immediately available. Mr. Faal told the FBI he had served in the U.S. Army and Air Force and that he decided to join the coup because he thought elections were rigged and he was concerned over the “plight of the Gambian people,” according to the affidavit. Mr. Njie, who is of Gambian descent, led the group of about a dozen people in an attempt to restore democracy to the country, according to the FBI agent’s testimony in the affidavit. The group hoped to take control peacefully, but they thought 160 members of the country’s military would join them. During the fall, Mr. Faal and co-conspirators bought guns, ammunition and other equipment at shops in the U.S. and shipped it to Gambia, according the affidavit. As they prepared, members of the group shared an “operations plan” that was stored online. A spreadsheet allegedly found at property belonging to Mr. Njie in a search on Saturday listed a total budget of $220,798 for equipment, transportation and aid to the family members of the plotters. It included two sniper rifles that were labeled “NOT really necessary but could be very useful,” according to a photo included in the affidavit. Last month, members of the group traveled to Gambia from the U.S., United Kingdom and Senegal, according to the affidavit. They allegedly planned to ambush Mr. Jammeh’s convoy as he traveled around in late December, firing shots into the air to scare off his bodyguards. But then they learned that he planned to travel abroad on Dec. 26. They changed tack, trying to take over the presidential office instead. The plotters thought their task would be easy—they expected the Gambian soldiers guarding the building to run away at the first sign of trouble, believing the soldiers didn’t want to die for Mr. Jammeh, according to the affidavit. They also thought they would get backup from some sympathetic soldiers. Instead, they found extra soldiers on guard. One team of plotters shot into the air. Instead of fleeing as expected, the soldiers began to fire at them, killing them all. Mr. Faal’s team, which had failed to breach a door, retreated. Mr. Faal shed his military gear, put on civilian clothes and took a ferry to Senegal. The plan had called for Mr. Njie to remain out of sight until the plotters had taken control. He flew to Dulles International Airport outside Washington, where he was arrested Saturday. On Dec. 30, the U.S. State Department issued a statement saying it was aware of the attempted coup that day. “We strongly condemn any attempt to seize power through extra-constitutional means,” the statement read. “We regret the loss of life and call on all parties to refrain from further violence.” Mr. Jammeh himself came to power in a coup in 1994, from his position as a 29-year-old junior officer. He has ruled undemocratically, with foreign observers condemning all four of the elections held in Gambia during his 20-year-reign. During the last vote, in 2011, Gambia’s West African neighbors refused to send monitors, citing “an opposition and electorate cowed by repression and intimidation.” In 2007, Mr. Jammeh claimed to have concocted a cure for AIDS using a banana-based paste. The year after that, in comments carried by the British Broadcasting Corp., he threatened to “cut off the head” of every gay man and woman in his country. The following year, Amnesty International accused his government of kidnapping as many as 1,000 Gambians on charges of witchcraft, and forcing them to drink hallucinatory potions. The government said human-rights allegations are part of a smear campaign. “Our human-rights record is better than that of the U.K. and U.S.A. put together,” it said. Mr. Jammeh doesn’t appear likely to cede power soon. His picture hangs on billboards plastered across the country, above the words, “Say No to Drugs and Corruption.” He is frequently trailed by singers and drummers who praise his name, and he is seldom seen without his trademark set of prayer beads and a ceremonial scepter. “If I have to rule this country for one billion years, I will,” he told the BBC in 2011. “He’s almost a caricature of a banana republic,” said J. Peter Pham, Africa director at the Washington-based think tank Atlantic Council. “A little bit of attention wouldn’t hurt a place like that.” *Source WSJ]]>