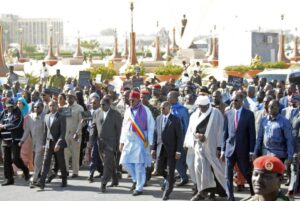 Marching some five kilometres (three miles) through Chad’s capital, demonstrators waved the national flag and chanted in French and Arabic: “Kick the forces of evil out of our territory.”

The event came as a huge convoy set off from N’Djamena to combat the Islamists sowing terror in northeastern Nigeria and northern Cameroon.

Thousands of locals hailed the arrival of some 400 vehicles in the Cameroonian border town of Kousseri, an AFP journalist reported.

Early this month Boko Haram launched a full-scale assault on the strategic town of Baga on the banks of Lake Chad, which straddles the borders of Chad, Nigeria, Niger and Cameroon.

Chad is part of a regional force against Boko Haram that was based in Baga — but both Chad and Niger had withdrawn their troops before the January 3 attack.

Chadian President Idriss Deby said in a speech read by the speaker of parliament that the new deployment aimed to recapture Baga.

“We answered the call of (Cameroon’s) President Paul Biya. We cannot remain indifferent to what happens to our neighbours,” Deby said as his troops crossed into Cameroon.

“Cameroon must not be left alone to face this threat that has so hurt innocent people in Cameroon and in Nigeria” he added, calling for a “broad coalition” to fight Boko Haram.

But Nigeria expressed lukewarm support for the Chad mission.

“All support for our operations will be welcome, but it must conform with our own ongoing operations,” Nigerian army spokesman Chris Olukolade told AFP.

Cameroon’s government said on Monday that its army killed 143 Boko Haram fighters who had attacked a military base in the northern town of Kolofata.

This week French President Francois Hollande and US Secretary of State John Kerry accused Boko Haram of committing crimes against humanity, while a top UN official, Leila Zerrougui, called for a regional response to the crisis. [caption id="attachment_15567" align="alignright" width="300"] 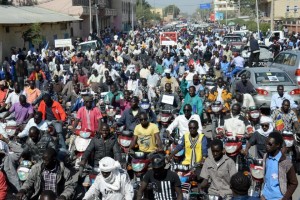 People take part in a rally in N’Djamena on January 17, 2015 to show their support for a decision to send troops to fight Nigeria’s Boko Haram Islamists (AFP Photo/)[/caption] Ghanaian President John Dramani Mahama, who heads the regional Economic Community of West African States, called Friday for a “specific plan of action to end the problem of terrorism” in Africa. Satellite pictures released by Amnesty International and Human Rights Watch last week showed around 3,700 buildings in Baga and nearby Doron Baga damaged or destroyed.

Daniel Eyre, Nigeria researcher for Amnesty International, said as many as 2,000 civilians may have been massacred, but Nigeria’s army objected to the “sensational” claims and said that the death toll in Baga was about 150.

Brutal raids, massacres, suicide bomb attacks and kidnappings by Boko Haram have claimed at least 13,000 lives and driven an estimated 1.5 million people from their homes, mainly in northeastern Nigeria.