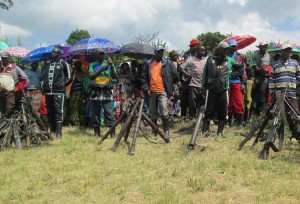 Members of the Democratic Forces for the Liberation of Rwanda rebel group, in Kateku, North Kivu, in the Democratic Republic of Congo, May 30, 2014 (AFP Photo/Jean Baptiste Badhera)[/caption] Arusha (Tanzania) (AFP) – Tanzania is supporting disarmament efforts against Rwandan rebels in lawless eastern Democratic Republic of Congo, President Jakaya Kikwete has said, dismissing accusations he favoured the insurgents as “preposterous.”

United Nations peacekeepers are preparing a military offensive against the Democratic Forces for the Liberation of Rwanda (FDLR) — an ethnic Hutu group, some of whose members took part in atrocities in the 1994 Rwandan genocide before crossing into DR Congo — after they ignored a January 2 deadline to surrender.

Tanzanian troops are part of the UN force.

Kikwete said he wanted to “set records straight” about Tanzania’s role in “the ongoing voluntary surrender and disarmament exercise by the FDLR rebels,” he told diplomats in Dar es Salaam late Friday, according to a copy of the speech released by the presidency.

“We have always been supportive and will continue to be supportive of these efforts to ensure the eastern DRC is free of armed groups that threaten the security of the people of Congo and Congo’s neighbours,” he added.

But Tanzania, which borders both eastern DR Congo and Rwanda, has been accused by Kigali of favouring the FDLR.

Relations have been tense between Dar es Salaam and Kigali. 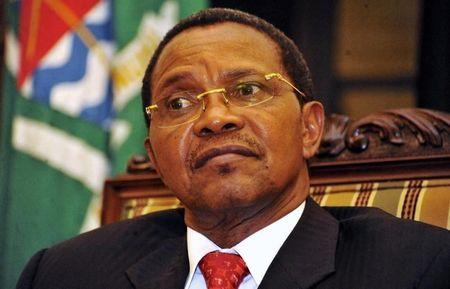 “We have always been supportive and will continue to be supportive of these efforts to ensure the eastern DRC is free of armed groups that threaten the security of the people of Congo and Congo’s neighbours,”says President Kikwete[/caption]

Tanzanian troops with the UN force in DR Congo in 2013 helped to defeat the ethnic Tutsi M23 rebel force, which according to the UN was backed by both Rwanda and Uganda, claims they have strongly denied.

Kikwete insisted Tanzania was not supporting the rebels. “Any misrepresentation of Tanzania’s position is done by people who pretend to read Tanzania’s mind and make their thinking the truth,” Kikwete added. “This is preposterous and contemptible. It is done by people who have ill intensions against our country.” The United Nations is pushing for the disarming of dozens of rebel and splinter groups after two decades of conflict in eastern DR Congo, much of it fuelled by the lucrative trade in minerals. African regional leaders are due to discuss the planned offensive at a summit in Angola on January 15-16.

But some observers say some countries with troops in the UN force — Tanzania in particular — could oppose the participation of their soldiers in these operations.