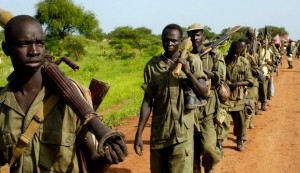 The price of failing to bring about lasting peace in South Sudan could be $158 bln over the next two decades, according to a new study released today at the Radisson Hotel in Addis Ababa. The conflict, which erupted in mid-December, 2013 has already killed tens of thousands and placed nearly a third of the country’s population at a risk of famine. Released on the eve of two major Summits in Addis Ababa for IGAD and the AU, the report, called South Sudan: The Cost of War, has introduced empirical research that makes a compelling case for immediate action by South Sudan’s neighbors and African states to stop the fighting and avoid massive economic and financial costs. The report quantifies the additional economic costs that would be incurred by South Sudan should the conflict continue beyond today. It takes into account the decline in oil revenue and remittances and increases in military spending. It also looks at costs incurred in other countries in the region and at a global level. The collaborators on the report, Frontier Economics, the Center for Conflict Resolution in Uganda and the Center for Peace and Development Studies at Juba University, have called on the African Union Peace and Security Council to publicly release the findings of the Commission of Inquiry on South Sudan as soon as possible and to use those findings as a basis for imposing targeted individual sanctions such as asset freezes and travel bans that IGAD foreshadowed last November. “The Cost of War report shows there are severe economic costs that have not previously been known that must now be acknowledged. Next week, at the AU Summit in Addis Ababa, all Heads of African States must realize that South Sudan’s economy and our people simply cannot afford to forgo billions of dollars it will cost to  endure five more years of conflict,” warned Dr. Luka Biong of CPDS. “There can be no price tag on the suffering of South Sudan’s people from displacement, famine and death,” said Dr. Salim Ahmed Salim, former PM of Tanzania and Secretary- General of the OAU, writing in the foreword of the report. “But it is possible to assess the direct economic costs by estimating the loss of productive assets and capital and the reduction in economic activity, and they are large.” Major findings of the report: •       If the conflict continues for another one to five years, it will cost South Sudan between 22.3 and 28 billion USD depending on its severity. However, if the effects are measured over twenty years to allow for flow-on effects, the loss is even greater- up to 158 billion USD. •       The human costs of conflict- death, hunger and disease- also have significant longer- term economic impacts. Just taking the effects of hunger on labor •       The gov’t of S Sudan should request international assistance from the AU and the UN to establish a hybrid court to try to the most serious crimes committed during the current conflict. The country should also embark on national reconciliation and healing processes that are owed and driven by communities so they respond to the circumstances of South Sudan. *Source diretube]]>