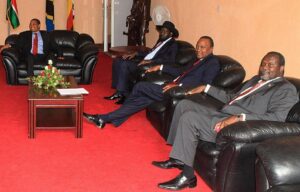 Fighting broke out in newly-independent South Sudan in December 2013, when Kiir accused his sacked deputy Machar of attempting a coup.

The escalating war split the SPLM along ethnic lines and set off a cycle of retaliatory battles and massacres across the country that have left tens of thousands dead and pushed the country to the brink of famine.

Speaking after the deal was signed, Tanzanian Foreign Minister Bernard Membe offered his “congratulations to the SPLM leadership for reaching an agreement to reunify their party for the good of South Sudan.”

The talks were hosted by Tanzanian President Jakaya Kikwete, with leaders of neighbouring nations also flying in to ensure the arch-rivals signed.

The precise details of the latest deal, however, were not given.

The rival factions have meanwhile continued to fight it out on the ground, and five previous ceasefire agreements signed over the course of 2014 have been short-lived.

The talks in Tanzania were a parallel effort to stop-start peace negotiations brokered by the east African regional bloc IGAD in the Ethiopian capital Addis Ababa.

Another round of IGAD talks are due on the sidelines of an African Union summit in Addis Ababa at the end of January.

Kiir and Machar last met in November in Addis Ababa, where they agreed again to an immediate halt to the war — only for that accord to be shattered in a matter of hours.

Heavy fighting was reported earlier this week between army and rebels in the central Lakes state, and army spokesman Philip Aguer on Tuesday accused Machar’s forces of blowing up an oil well in Unity state.

No overall death toll for the war has been kept, either by the government, rebels or the United Nations, although the International Crisis Group says it estimates that at least 50,000 people have been killed.