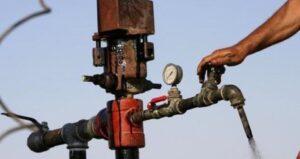 Photo©Reuters[/caption] South Sudan’s oil production has risen by about 9,000 barrels per day (bpd) to 169,000 bpd from December last year, petroleum minister Stephen Dhieu Dau said on Tuesday, despite sporadic fighting near oil-producing fields. Production has been slashed by about a third since fighting broke out in the world’s newest state in December 2013, with many South Sudanese oil wells damaged and output in decline at functioning fields due to a dearth of spare parts.

“We (were) producing at the average of 160,000 but it has been increased now from the beginning of this year. It has gotten to 168,000 to 169,000,” Dau told reporters in the capital Juba. He said all the production was taking place in Upper Nile State but did not elaborate why production was rising. South Sudan officials last year said that former foe Sudan was planning to send equipment and engineers to boost output in Upper Nile State and Unity State, the two oil-producing regions. South Sudan relies almost exclusively on oil for government funds. Last year oil revenues were hit by a decline in output and falling oil prices on global markets. Violence erupted over political tension between President Salva Kiir and his sacked deputy and rival, Riek Machar. The fighting has killed more than 10,000 people, caused more than 1.5 million to flee and driven the country of 11 million closer to famine.
*Source theafricareport
]]>