Somaliland has become a bastion of democracy and stability compared with Mogadishu and other areas in the war-torn south, writes Christopher Adams. [caption id="attachment_15488" align="alignleft" width="300"] 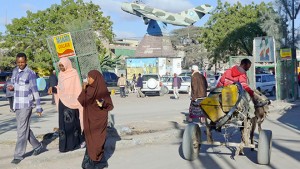 A civil war memorial monument in Hargeisa, Somaliland. The aircraft is a Somali air force MIG fighter jet that crashed while on a bombing raid over Hargeisa during the 1988-1990 civil war[/caption] From the back seat it appears as if the bus has been taken over by multicoloured ghosts. The clothing worby the women of Ethiopia’s eastern Somali region comes in a range of vivid hues and flows from head to toe, giving my fellow passengers an almost ethereal appearance as they sit rigid in their seats. Two rows ahead, a girl turns and places her legs in the aisle as the old bus crosses the arid and featureless expanse that marks the country’s frontier with the self-proclaimed Republic of Somaliland. A wriggling child is struggling to escape from beneath a blanket piled on her knees. She looks no older than 15 and one could easily assume that the baby boy who soon emerges is a brother or cousin. But women in this harsh corner of the Horn of Africa marry young, and the motherly connection soon becomes obvious from the way she caresses the boy. Plump and cute, he’s maybe 10 months old and kitted out in a spotless polkadot outfit that could have come off the racks at Pumpkin Patch. His bright eyes sparkle as he chuckles at his mother, who’s pulling faces at him. This child would never make the cut for Save the Children or Unicef advertisements that shape too many Westerners’ perceptions of places such as the one we’re passing through. My destination is Somaliland’s capital, Hargeisa, and after a one-hour journey from the Ethiopian city of Jigjiga the bus lurches off the highway and comes to a stop in the border town of Wajale. The young woman bundles up the boy, fights her way off the vehicle and disappears into the crowds. As with other frontier towns in the developing world, Wajale has an edgy, lawless atmosphere. Its main street is lined with decrepit single-storey buildings housing coffee shops and retail outlets that sell nothing but khat, a narcotic shrub whose leaves have an amphetamine-like effect when chewed. It’s legal and the favoured intoxicant in a Muslim region where alcohol is taboo. Wajale’s entire male populace seems to be at a loose end. The men hang about in the street, languidly awaiting the daily khat delivery, which should arrive at about midday from the Ethiopian highlands to the southwest. Few Westerners enter Somaliland by this route and it seems I’m a welcome distraction for Wajale’s time-rich citizenry. “Faranji, faranji,” they shout, using the local term for “foreigner”, as if I need to be reminded. After clearing Ethiopian immigration I walk across no-man’s-land, which serves as Wajale’s rubbish tip, into a country that doesn’t officially exist. In the eyes of the international community Somaliland is an autonomous region of Somalia. The staunchly patriotic Somalilanders, however, consider their “country” the rightful successor state to the British Somaliland Protectorate, which gained independence from Britain in 1960 but soon united with the Trust Territory of Somalia to the south — formerly an Italian colony — to create the modern nation of Somalia, whose capital became Mogadishu. Somaliland declared its independence for a second time in 1991 amid the anarchy that engulfed Somalia following the downfall of dictator Siad Barre. Since then the region – or country, or whatever you’re supposed to call it — has become a bastion of democracy and stability compared with Mogadishu and other areas to the south. But Somaliland’s quest for statehood has been hindered by many challenges, not least a fear that international recognition of its independence could worsen an already fragile political situation in Somalia. [caption id="attachment_15489" align="alignright" width="300"] 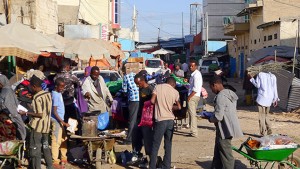 Traders and shoppers in the central market in Hargeisa[/caption] What is officially an autonomous region, however, has every appearance of being a fully fledged nation, with its own currency, judicial system, army and police force. And visitors must first obtain visas from Somaliland’s embassies in Addis Ababa, the Ethiopian capital, or London. Reaching the other side of the border I quickly locate the immigration office where I’m required to present my documentation. Its sole official comes bounding out of the building when he notices my approach. Stopping just in front of me, beaming, he salutes and says: “Welcome to Somaliland.” The warm reception continues as I’m ushered into his office and seated in a big leather chair. He takes my passport and flicks through its pages. “You’re very fat,” he then observes. “Sorry?” “In the photo,” he replies, waving the information page of my passport. “You’re very fat in this photo. It doesn’t look like you.” A few weeks in Africa have shaved some kilograms off my frame and I explain the situation, which seems to satisfy him. With my documents in order he helps organise my onward journey in a shared taxi to Hargeisa and I settle into the front seat of the Toyota Camry – which is considered room for two and therefore requires a double fare – and relax as we begin motoring out of Wajale. But my repose is disturbed when it becomes evident that Ahmed, the driver, is an utter maniac behind the wheel. He thinks a cruising speed of 145 km/h is suitable for the narrow, potholed highway that leads to Hargeisa. Nothing slows Ahmed down. Not overtaking vehicles coming in the opposite direction or the camels, assorted livestock and monkeys that often wander on to the road. I suspect he’s already been hitting the khat, despite the early hour. At least Ahmed’s suicidal driving style means we soon cover the 100km journey and are soon on the hilly outskirts of Hargeisa, where rusted billboards line the highway advertising everything from biscuits to World Toilet Day. Walking around the city, it’s easy to forget you’re officially in a country that has become synonymous with anarchy and disorder. Money-changers sit unguarded in the street with huge stacks of cash as commerce flourishes around them, while my visit was possible without the heavily armed escort I would require in many parts of Somalia. “Somaliland is very peace,” is the mantra of almost everyone I meet. In Hargeisa’s central market, I’m pulled aside by Abdelahi, who doesn’t mince his words when describing what will apparently happen to me should I visit Somalia proper. “They’ll shoot you in the face, ” he says casually. If it weren’t for the piles of cheap Chinese electronics, the market, set within the city’s winding, dusty alleyways, would seem almost medieval. Vendors hawk bloody chunks of fly-covered meat – including camel – vegetables, clothing and mountains of khat. A shopkeeper calls me over. “Who is your President?” he asks, before telling me the name of his and proudly describing the many reasons why Somaliland is superior to those barbaric lands south of the unofficial border. Meeting the Somalilanders, you get a sense of positivity – of a people pulling together to avoid the fate that has befallen Somalia, whose Government still struggles to assert control over many areas and where a bloody insurgency is being waged by al-Shabab jihadists. Quite rightly, the Somalilanders are very proud of what they have achieved since the early 1990s. They’ve managed to chase away the ghosts of their past. *Source hiiraan        ]]>