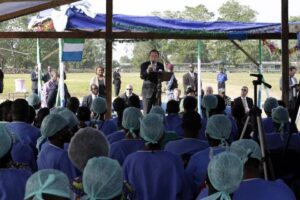 Freetown (AFP) – Sierra Leone now has the means to curb the Ebola epidemic, the new head of the UN mission for the fight against the disease and a senior World Health Organization official said.

“Sierra Leone is in much better shape today to control Ebola than it was a few weeks ago,” UN Ebola mission chief Ismail Ould Cheikh Ahmed said at a press conference in the capital Freetown Friday, on his first visit to the west African countries ravaged by the outbreak.

“From everything I’ve seen so far, I am optimistic that Sierra Leone can get by,” he said, though he warned it would require “considerable effort by all”.

WHO deputy head Bruce Aylward said it was his fifth trip to the country and that on the previous four it was clear that Sierra Leone could not stop Ebola.

He said there had been a huge change since his last visit, with beds available and burial teams, but stressed the need to use the new resources effectively. The officials spoke as the government said Pujehun district in the south had become the first in the country to have no new cases registered for 42 days, twice the incubation period of the virus.

The Ebola outbreak in West Africa, the worst since the virus was identified in 1976, has left nearly 8,300 people dead with more than 21,000 cases identified since December of last year, according to WHO figures.

The vast majority of the cases have been confined to Sierra Leone, Liberia and Guinea.