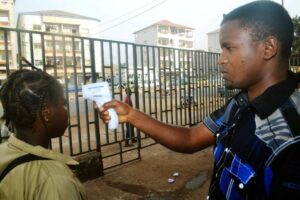 A Guinean student gets her temperature checked on January 19, 2015, as she enters school in the Ratoma area of Conakry. Sudents head back to school after nearly four months of recess due to the Ebola outbreak (AFP Photo/Cellou Binani)[/caption] Conakry (AFP) – Children on Monday trickled back to school in Guinea, where the Ebola epidemic broke out in December 2013, as west Africa cautiously began turning the page on the deadly outbreak.

Schools in neighbouring Liberia will reopen on February 2, while Sierra Leone, the country with the largest number of Ebola cases, has yet to set an official date.

The three countries have borne the brunt of the epidemic, representing 99 percent of the more than 8,600 deaths in the worst-ever outbreak of the haemorrhagic virus.

Finally, the World Health Organization has reported a decline in infections.

Overall, some 22,000 people have so far been infected, according to the WHO.

Guinea decided last week to encourage some 2.5 million primary and secondary school students to return to school, four months after the normal October start of the academic year.

But initial attendance was low.

“I never really even expected (classes) to restart,” he told AFP at his school in a suburb of Conakry, the Guinean capital.

The school’s principal, Ibrahim Bah, noted: “We are in the middle of the month and it does not work (financially) for many families.”

The schools have been provided with health kits containing chlorine, thermometers and soap, while teams will monitor students to detect possible infections, the government said.

But Fanta Camara, who has a child at another Conakry school, was dubious.

“I am not convinced with the safety arrangements for students. I am heading back with my daughter,” she said.

On Saturday, Guinean President Alpha Conde threatened to arrest those who refused to comply with Ebola prevention campaigns.

“We have been putting our message out for a long time, but there are people who don’t want Ebola to end,” he said, adding that security forces had been ordered to make arrests if people refused treatment.

Violent reactions to Ebola are frequent in Guinea, especially in the south, where tensions are high between local groups and the central government.

An angry mob last week killed two men and burned their bodies, convinced that they were infected with Ebola.

Meanwhile, Mali, which along with Senegal and Nigeria had a minor Ebola scare, was able Monday to declare itself Ebola-free after 42 days without any new cases.

Senegal and Nigeria had previously already done so.

“We have no right to let down our guard. The battle continues,” said Ibrahima Soce Fall, the head of the Malian office of UNMEER, the United Nations Ebola task force.

The warning apparently fell on deaf ears for some residents, who could be seen greeting each other by shaking hands.

“Shaking hands is a tradition here, but Malians would do well to keep to the recommended hygiene habits,” said shopkeeper Mohamed Toure.

In Sierra Leone, the government launched the second phase of its anti-Ebola campaign, the National Ebola Response Centre (NERC) said.

Despite the signs of progress, government officials and international agencies have urged continued caution.

“We are capitalising on the momentum generated to kick out Ebola as the overall situation is improving drastically,” Yahya Tunis, NERC Communication Officer, told AFP.