South Africa has taken leadership of the United Nations’ “Group of 77,” during a particularly interesting year for that coalition of developing nations. [caption id="attachment_15335" align="alignleft" width="640"] 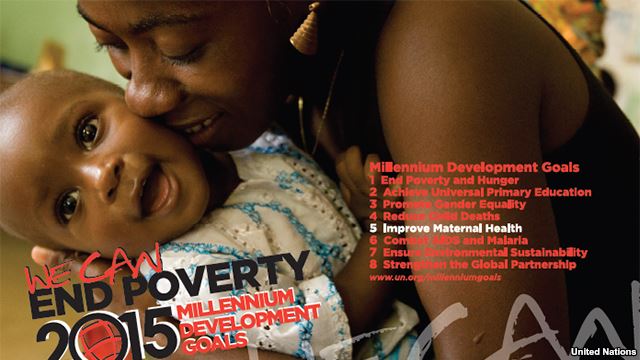 A United Nations promotional poster for the Millennium Development Goals. The deadline for attaining the goals is 2015.[/caption] The new post puts South Africa in a position both of power and responsibility as the U.N. enters its deadline year for the Millennium Development Goals (MDGs) – global targets for developing nations. The G77 represents a third of the U.N.’s membership, and includes nations as diverse as Bosnia and Herzegovina, a once-war-torn nation that is now striving to join the European Union – and Somalia, a chaotic, violent, woefully underdeveloped nation on Africa’s east coast. South Africa’s Deputy Minister of International Relations and Cooperation, Luwellyn Landers, made clear that he understood the gravity of the situation in his acceptance speech before the group in New York this week. The development goals, he said, will be a top priority. “This year will prove to be a crucial year in which the various envisaged development processes would demand that we, as a group, remain even more steadfast in promoting the interests of developing countries,” he said. “The MDGs, adopted in 2000, set bold targets for development and were key in forging a global cooperation framework for development. Foremost in our efforts this year will be the evaluation of the progress made in reaching these goals and the negotiation of the post-2015 development agenda.” But Landers also reminded the world’s superpowers of the collective might of the group. South Africa has repeatedly hinted at its own global ambitions, notably by joining BRICS, the economic bloc that also includes Brazil, Russia, India and China. Landers noted that the Group of 77 will continue to press to upturn the northern hemisphere’s grip on global power. All five of the U.N. Security Council’s permanent members — Britain, China, France, Russia, and the U.S. — are northern nations. “South-South Cooperation is key for international cooperation and partnerships for development. This is especially in terms of global, regional and country-level efforts to achieve balanced sustainable development,” he said. “We must reiterate that South-South Cooperation is not intended to be a substitute for the obligations and responsibilities of the developed North.” “Over the last few years, several developing countries have become the key drivers of global growth and their development is having a significant impact on the world economy,” Landers contined. “Growth and economic development in the South has significantly altered the strategic balance of power towards the countries of the South.” *Source VOA
]]>