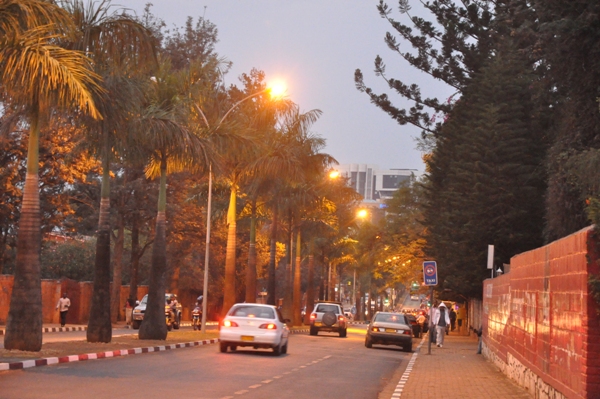 Clean Kigali Street. Condé Nast Traveler a UK based luxury and lifestyle travel magazine has included Rwanda among the top 15 picks for where to go in 2015. The magazine says Rwanda is the place to travel due to beautiful high-altitude forests, its lakes, and Kigali, its capital city.[/caption] Condé Nast Traveler, a UK luxury and lifestyle travel magazine says despite the horrific 1994 genocide Rwanda’s effective leadership has managed to turn around the nation. Travel enthusiasts will have to see mountain gorillas in their beautiful high-altitude forests, its lakes, and Kigali, its capital city. Joselyne Murekatete, 40, remembers her first day in school when she was punished by her teacher because she wore shoes. Shoes had been banned. “The following days, I could remove them miles away to avoid rebuke,”She says. She says that her teacher claimed only few students could afford shoes and banning them aimed at avoiding jealousness among classmates. However, after class every pupil could be seen wearing shoes. Souzanne Uwimana, 50, a veteran teacher in Kigali admits, “Teachers could join pupils in a campaign to mock a girl pupil who, by accident sullied her school dress during menstrual period. Instead of covering her up, we could take her for a prostitute.” Outside school, passers-by would litter food leftovers, plastic bags and water bottles even behind bins. Today Murekatete works as a street cleaner and resident of Kimihurura a suburb of Kigali city. She has vivid memories of how city dwellers, including “literates” used to disregard hygiene, until 1990s. Open defecation would not exempt city attractions while domestic waste were dumped in water channels or in idle plots, to be carried downhill and pollute water reservoirs. New country, new people In all Rwandan schools today, Hygiene and sanitation and wearing shoes are compulsory. Hygiene and sanitation have become a priority in Kigali and countrywide. After halting the Genocide against Tutsi in 1994,the Rwanda Patriotic Front-Inkotanyi worked on society positive thinking while involving citizen in deciding own fate. Cleaning Day “Umuganda”, a traditional practice that was being dodged would be strengthened and then enacted. Today every last Saturday of the month, weddings, meetings and social activities are halted as village mates meet and clean say a health center, a street or a public garden.  Public officials and visitors also get involved. After two hours of cleaning, they sit and discuss; hygiene good practice and cleaning activity for the following month. Omar Khalfan, a political analyst says “when citizen are involved in a program, they own it, without being coerced.” Who cleans Kigali? Besides Umuganda, Kigali adopted a comprehensive hygiene system that collects trash from households and public places. Kigali city relies on a-1 year old sweeping machine for the 15 km long city-airport road. For the rest, 200 km, the city contracted 15 cleaning cooperatives which earn about $ 44,000 to pay about 400 workers, essentially women. Each cleaner earns $ 44 monthly, which barely pays house rent in Kigali, yet they are highly motivated. “We hardly make ends meet. We just feel proud to be part of a city all nations find beautiful. It is part of patriotism,” said Jeanine Mukashema, a cleaner.  Patriotism is part of Rwandan motto beside Unity and Work. Cleaners helped Kigali collect polythene bags from neighbourhoods in 2005 when environment law banned them and recommended biodegradable bags. Regional countries tried to emulate in vain. “In less than ten years we have no more plastic bags in our landscape; Rwandans are very responsive,” observed Dr. Charles Kabwete, a political analyst. Dustbins have been established along pedestrian paths which reduce disorder on roads. Dustbins have been installed by Private companies which place advertisements in return. Different businesses, offices, markets and schools also hire cleaning companies. Cleaning companies since 2010 charge a monthly $7 to collect garbage from house to house and dumped in a-3ha city landfill. 600 tons of garbage is collected daily. “In Western countries, waste collection is a State business. Residents pay through tax, a burden for many,” said Jean Paul Ngenzi, the owner of Agruni, a cleaning Company. Do’s and Don’ts  Dropping liter in Kigali is nearly a sin even children know. The city Mayor last year pleaded with children to keep their cookies’ sachets until they find a dustbin. Illegally crossing through a garden and urinating on the road attracts $ 7 fine. Knocking down a palm tree on city roads attracts a fine worth $ 700. Corridors in commercial buildings should also have colorful flower pots. Is Kigali Cleanest city? Looking at city decoration, visitors have given Kigali an alias of “African Cleanest City.” “It’s as clean as Paris and it is very safe for the mzungu (white person) to live,” said Caroline Anne, English volunteer. “If my queen moves from Kigali airport to Serena Hotel in the city hub, she will not believe that she is in a developing country, but a rich country,” she said. Kerry Gill a volunteer says was surprised to see an “African city where you find no littering and any dog or cat cadavers along city roads.” Rwanda has designed a strategy that will help to earn over $150m annually from international conferences by 2015, up from $49m presently. The government is training citizens on the best conduct as reflected among king’s warriors “Intore”-they were highly disciplined warriors that fought and annexed many regions from neighboring countries. Even diaspora youth come home every year; spend a-three week period learning the spirit which features hygiene, self-reliance. Source: Source * newsofrwanda/ KT Press]]>