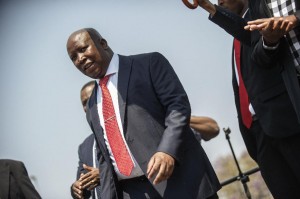 “We are going to ask Zuma to answer before he starts with the State of the Nation Address (SONA) when he takes to the podium,” firebrand leader Julius Malema told reporters in Johannesburg.

It will be the latest stunt by a young party that has hounded Zuma for months over his refusal to accept an ombudsman’s decision that he should repay some of the $24 million (19 million euros) of taxpayers’ money spent on additions to his rural Nkandla home. The refurbishments included a swimming pool, amphitheatre, cattle pen and chicken run.

In August, Malema and 19 of his lawmakers were suspended from parliament after disrupting a question-and-answer session with the president by chanting: “Pay back the money”. The move sparked unprecedented irreverence among fellow opposition lawmakers, who attempted a filibuster to stop the house passing a report by members of the ruling African National Congress exonerating Zuma of any culpability in his housing upgrades. “The ‘Zuma pay back the money’ will happen straight during the opening of parliament,” said Malema on Tuesday. “We have to hold him accountable.” At the weekend, he demanded that National Assembly speaker Baleka Mbete convene a special sitting ahead of Zuma’s speech when Parliament opens on February 12.

“Please note that failure to accommodate our request will give us no other option but to insist that President Jacob Zuma answers these questions at SONA,” he said in a letter to Mbete according to local reports.

Mbete has refused, saying his request could be construed as “intimidation”, reported Johannesburg’s talk radio station 702.

The EFF has risen rapidly since its formation by disgruntled former ANC members, riding on the back of populist policies such as the nationalisation of mines and banks and the seizure without compensation of white-owned land.

They accuse the ANC of being lackeys of white minority capital, and appear in parliament dressed in “workers’ solidarity” outfits of red overalls, hardhats and maid’s uniforms.