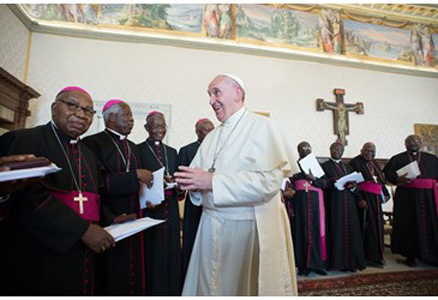 The 2015 trips, still in their planning stages and not confirmed, would come on top of his planned three-city visit to the United States in September.

Francis said he planned to canonize the 17th-century missionary Junipero Serra, who established nine missions in California, during the Washington leg of the U.S. trip, likely at the National Shrine.
During the U.S trip, Francis is expected to visit the White House and address Congress, then speak at the United Nations in New York, and participate in a massive Catholic rally for families in Philadelphia.
But he essentially ruled out travelling to El Salvador to beatify slain Archbishop Oscar Romero, saying the ceremony would be celebrated by a Vatican official, as is the norm for beatifications.
Francis, who disclosed his travel plans during an in-flight news conference on the way home from the Philippines, said the proposed African trips would likely take place at the end of 2015 to avoid the rainy seasons. No dates were given for Ecuador, Bolivia or Paraguay, but the visits are likely in July, Vatican officials said. Francis also confirmed he hoped to visit Argentina, Chile and Uruguay in 2016 — and Peru at some point.
The Vatican spokesman, the Rev. Federico Lombardi, stressed that the travel plans were “provisional and that nothing has been decided.”
Francis said he would have loved to have entered the U.S. via the Mexican border, saying it would have been a “beautiful thing, as a sign of brotherhood and of help to the immigrants.”
“But you know that going to Mexico without going to visit the Madonna (of Guadalupe) would be a drama. A war could break out!” he said, laughing. He said a Mexico visit would come in the future.
Speaking as his plane passed through Chinese airspace, Francis again expressed his openness to going to China, and denied recent speculation that he had turned down a requested audience with the Dalai Lama out of fears of angering Beijing.
Francis said the audience was rejected as a matter of Vatican protocol. “The reason was not a refusal of the person or fear of China,” he said.
China severed relations with the Holy See in 1951 after the communists took over. Emeritus Pope Benedict XVI and now Francis have sought to
mend ties.
*Source AP/Newvision
]]>