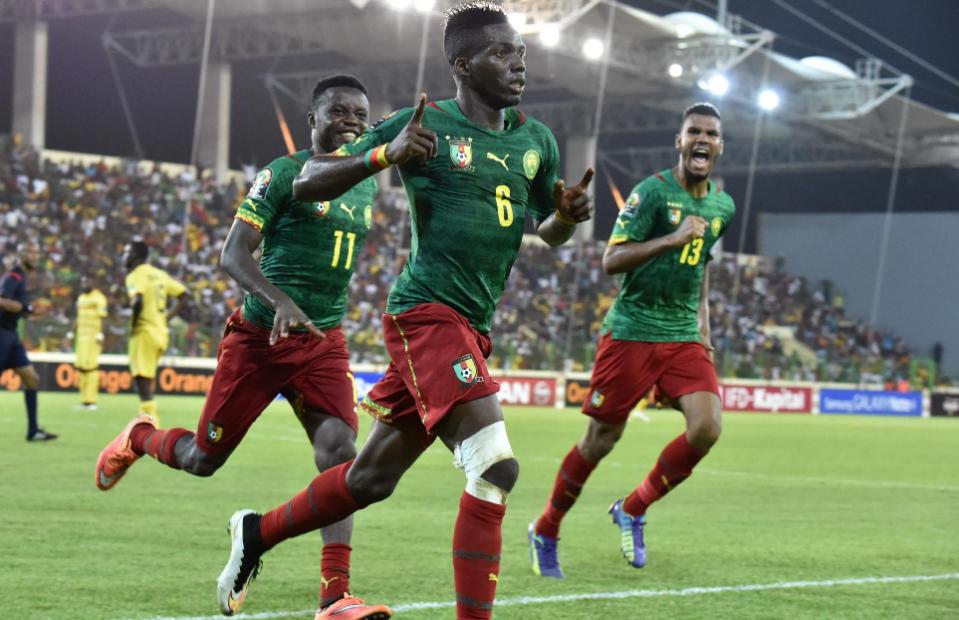 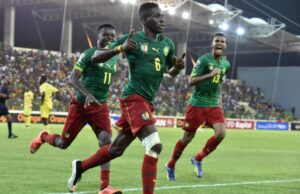 Cameroon’s defender Ambroise Oyongo (C) celebrates with teammates after scoring a goal during the 2015 African Cup of Nations football match between Mali and Cameroon in Malabo on January 20, 2015 (AFP Photo/Issouf Sanogo)

Malabo (Equatorial Guinea) (AFP) – New York Red Bulls right-back Ambroise Oyongo was the unlikely hero as Cameroon came from behind to draw 1-1 with Mali in Malabo in Group D of the Africa Cup of Nations on Tuesday.

Oyongo struck six minutes from time to cancel out a second-half opener by Sambou Yatabare in a game that came to life late on having appeared set to drift towards a goalless conclusion.

The draw followed a 1-1 stalemate between their Group D rivals Ivory Coast and Guinea earlier in the day.

Cameroon may no longer be able to call on the services of the legendary Samuel Eto’o, while giant Malian striker Cheick Diabate is not at this Cup of Nations due to a knee injury.

However, there was still no shortage of attacking talent on display in the second game of the evening at the Estadio de Malabo, from Cameroon skipper for the day Eric Maxim Choupo-Moting to Wolverhampton Wanderers winger Bakary Sako in the Mali ranks.

In front of a stadium that was packed to the rafters, fans were treated to a thrilling opening half-hour in which Sako in particular was a menace on the Eagles’ left flank.

He almost opened the scoring after 10 minutes at the end of a superb move involving veteran skipper Seydou Keita and left-back Adama Tamboura, but his shot was turned around the post by Fabrice Ondoa in the Cameroon goal.

Mustapha Yatabare, the elder brother of Sambou, then headed just wide moments later, while Sako had another attempt beaten away by teenage shot-stopper Ondoa, who belongs to Barcelona.

It was a difficult opening spell for Volker Finke’s side, who also lost midfielder Eyong Enoh to a thigh injury after just 17 minutes, with Franck Kom taking his place.

Nevertheless, the Indomitable Lions did manage to create a couple of good chances of their own in the first half, with Choupo-Moting — wearing the armband with captain Stephane Mbia suspended — seeing his header turned over by Soumaila Diakite in the Mali goal. 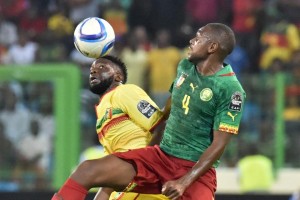 The encounter struggled to get going again after the restart, with an Aurelien Chedjou free-kick that was blazed over the bar as close as either side came until 19 minutes from the end.

That was when Sambou Yatabare won a free-kick wide on the left and then, when the set-piece was headed on towards the back post by Molla Wague, the Guingamp player controlled the ball on his chest and volleyed home through the legs of Ondoa.

But Cameroon did not give up and got their reward six minutes from the end thanks to Oyongo.

His early run into the box was matched by a fine pass over the top by Raoul Loe, with Oyongo controlling and then finishing from close range.

That was not quite the end of the drama, however, as Sambou Yatabare found the net in stoppage time after Keita’s free-kick had been saved, only for the offside flag to deny Mali a winner.