President Jonathan with PDP USA Chair Dr Harold Molokwu, PDP USA Intelligence Committee member Rev Uba Light, and Indiana PDP Chair Dr Sam Ogonuwe[/caption] The reluctant President Goodluck Jonathan was when he replaced late President Yar’Adua is today in the political fight of his life as he seeks a second term of office on the platform of the ruling PDP. In the face of a rejuvenated and seemingly united APC opposition and the security challenges posed by Boko Haram, the ruling party is having a hard time making a case for the re-election of President Jonathan. It is unfair to judge President Jonathan solely from the fight against Boko Haram says Dr. Harold Molokwu who heads the PDP in the USA. While Nigeria may be facing security challenges, President Godluck Jonathan has done much with his development agenda and Nigerians will trust him with a second term to stabilize the progress made. Molokwu who has been mobilizing Nigerians in the USA and mandating them to call their family members at home to support Jonathan’s re-election bid believes that Nigerians understand the differences between what Jonathan has done to help transform the country and the blurred and flawed agenda that the opposition APC General Buhari is offering Nigerians. “The APC candidate is lacking in democratic credentials and the dubious character of his acolytes can mean a return to a past that Nigerians have resolutely turned their back on.” Pressed on the lackluster response of the Jonathan administration in the fight against Boko Haram, Molokwu said while the sect has taken lives and slowed the services; the PDP government has done what it could in difficult circumstances to keep the country stable. Accusing the opposition APC of using a national crisis for political purposes, Dr Molokwu said with the support of well intentioned Nigerians, President Jonathan will lead the country to victory in the fight against Boko Haram. What are your impressions after the nomination of President Jonathan to seek reelection on the platform of the ruling party? For an administration that came into office with enormous challenges, lucid observers will be amazed at the number of tangible achievements recorded. Everyone is aware of the instability caused by unprecedented internal security challenges which have gulped enormous resources and impeded physical delivery of projects in some areas like economic management, non oil exports, rail aviation power, agricultures, housing security and political reforms amongst others have seen growing progress. The democratic dividends that progressive movements, military personnel, women and all are enjoying must be sustained .These and many others are the reasons our great party the PDP asked for our leader President Goodluck Jonathan to consider running for a second term so as to cement this progressive transformational agenda. How prepared is the PDP for the elections considering the opposition from the opposing APC and the challenges that the country is facing today? PDP –USA is satisfied with the Party leadership of the present Chairman Dr Adamu Mu’azu and the National Secretary Prof Adewale Oladipo. We have seen a growth in party loyalty and loyalty helps as members work for the collective interest. The Chairman maintained in public statements that candidates will emerge through the party machinery and not imposed. And it makes a lot of sense to know that we like to go wherever it is possible and try to ensure that popular candidates emerge to reflect the views and opinions of the members of the party and not two or three persons staying in an air-conditioned room to impose candidates or change results after primaries, we don’t think such can happen now, we are now a changed party in fact, you can call it a ‘transformational great party.’ We are happy that this has taken place because it has restored the confidence of members and our party is gaining more strength than ever before right now as you will experience in the forth coming general elections. We are going to wax stronger than we have ever done because of this new hope, there is nothing as good as hope because if you don’t have hope you will act in a desperate manner, any desperate person tends to make too many errors. Our party, I can confidently tell you is now on the right direction more than ever before, I must be honest with you that we commend Mr. President and all the key stakeholders. With respect to the opposition party APC, I personally congratulate their singular purpose to lead a country that is moving forward, without any serious program known to anyone, and with a former military dictator, who never believed in any democratic process. At this junction, our dear country does not need command tones rather we needs dialogue which comes with democratic process. Well, I am happy that we have a party like APC, and the reason I am one of those who feels very happy about this is that to have only one party will lead to complacency, it is good there is healthy competition, I wish APC will be stronger than it is now, it does not weaken PDP, it can only make us to be stronger and to work harder. Many are those who think that the current PDP Government has not done enough to alleviate the plight of Nigerians, what are some of the arguments or achievements that make the case for a second term for President Goodluck Jonathan? [caption id="attachment_15398" align="alignright" width="384"] 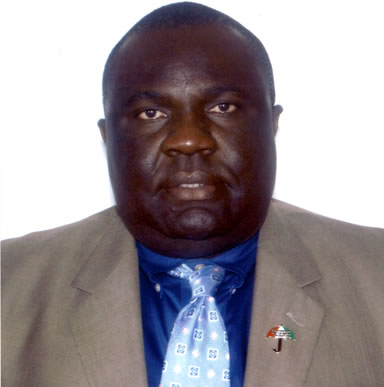