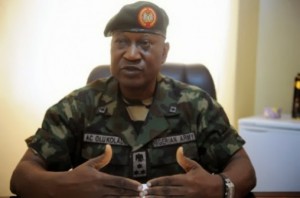 Major General Chris OLUKOLADE[/caption] The Nigerian military reject in absolute terms the report that has been repeatedly aired on CNN which presented footages of interviews with individuals claiming to be Nigerian soldiers. This said report is certainly another orchestrated smear campaign targeted at the image and character of the Nigerian Armed Forces by some entrenched interests. This CNN interview and report is an unfortunate effort to promote blackmail. It smacks of an international conspiracy against Nigeria’s national security. A reputable medium is not expected to indulge in propagating concocted stories from persons or individuals whose identity remains questionable. Unfortunately, the report has been so zealously repeated with a view to enhancing its effect in terms of mischief.  However, even if the blackmailers turned out to be Nigerian soldiers, the scenario only bespeak of the extent to which those who seek to bring the Nigerian military into disrepute can go in their desperation. Without making any attempt to dignify an absolute mendacity, this Headquarters wishes to restate that the Federal Government and the leadership of the Nigerian Armed Forces are without doubt committed and focused on the ongoing fight against terror and is ensuring that both weapons and welfare are incrementally provided to the fighting force. Our soldiers know this and they are gallantly working round the clock to reverse the unfortunate gains of terrorists and improve the  security situation in the affected areas. The orchestrated blackmail and propaganda against the leadership of the Nigerian military will certainly not stop us from stamping out terrorism in our country. Chris OLUKOLADE Major General Director Defence Information *Source globalreportersnews]]>