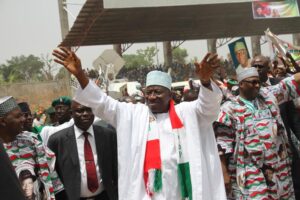 President Goodluck Jonathan’s campaign team has asked for the disqualification of the presidential candidate of the All Progressives Congress, APC, Muhammadu Buhari, from next month’s election. In an address by its spokesperson, Femi Fani-Kayode, the campaign team also accused the Independent National Electoral Commission, INEC, of deliberately allowing Mr. Buhari to contest the February 14 election even after he has ‘failed’ to meet the basic educational qualification required to run. Mr. Fani-Kayode, who addressed a press conference on Saturday in Abuja, said the inability of Mr. Buhari to present the minimum requirement of a school leaving certificate questions his morals and other credentials for pursuing the position of the president of Nigeria. Mr. Buhari’s academic qualification generated controversy recently after it emerged he submitted a sworn affidavit at a Federal High Court, FCT, High Court Abuja to the effect that all his academic qualifications were with the Secretary of the Military Board. His party, the APC, through its spokesperson, Lai Mohammed, said Mr. Buhari lost original copies of his credentials when his house was raided while he was in detention; and that he had been using court affidavits since then. “General Muhammadu Buhari was in detention for over three years; while in detention, captors raided his residence and vandalised his property including certificates and diplomas; and that consequently, after his release, whenever the General is asked about his academic qualifications, he would refer such bodies to the Military Command, who has his service records including his academic certificates,” Mr. Mohammed said in a chat with Leadership Newspaper last weekend. He also said Mr. Buhari had taken the same procedure for the 2003, 2007 and 2011 elections in which he was a candidate. Mr. Jonathan’s campaign team, however, said it is not satisfied. “Academic qualification is a threshold issue that cannot be waived for any citizen no matter how highly-placed and irrespective of whichever region such individual comes from except as provided by the constitution,” Mr. Fani-Kayode said. The former minister cited Section 131 of the Nigerian constitution which states that: “A person shall be qualified for election to the office of President if: (a) He is a citizen of Nigeria by birth (b) He has attained the age of forty years(c) He is a member of a political party and is sponsored by that political party; and (d) He has been educated up to at least School certificate level or its equivalent.” Mr. Fani-Kayode said section 131 (d) is a specific directional order for all candidates to show proof of education up to a minimum standard not below school certificate or its equivalent. “But from what INEC has published, Buhari has not submitted any personal particular of minimum school leaving certificate for the 2015 election and, shockingly, from INEC documents displayed in all constituencies, he also did not submit anything in 2011 and never referred the electoral umpire then to the Secretary of the Military Board as well as previous elections he contested as evidenced in all available INEC records until this current discovery. “If the constitution did not require proof, it would not specify a minimum,” he said. Electoral Act The former Minister of Aviation added that the current Electoral Act directs that proof of educational qualification must be sworn to by each candidate at a Court under Section 31 (ii) to (v). He noted that for elections to the office of the president and for the purpose of display of particulars of candidates for all presidential elections, the entire country is taken as one constituency. “Nigerians that have perused the affidavit of nomination as submitted by General Buhari and as published in all INEC offices, as well as the copies of his similar INEC documentations for 2011 election, could see clearly that General Buhari who claims to be a man of integrity has not been true to Nigerians. “It can be seen, as indicated in section 31(6), that there are reasonable grounds to believe that a false deponent was declared in the affidavit where it indicates that all documents relating to the personal particulars of General Buhari are with the Secretary of the Military Board,” he said. He said in the form he filled for the 2015 election, Mr. Buhari referred INEC to the Military Board for copies of his educational qualification, even after Section C of the form states that candidates should “attach evidence of all educational qualifications.” He also said it was curious that Mr. Buhari did not refer INEC to the military board in 2011. Mr. Fani-Kayode said the military board like any other body does not keep or retain original copies of personal particulars of individuals such as birth certificates, passports, and academic credentials of any personnel, especially retired personnel after over 3 decades. “It must be stated that INEC erred in law by publishing the name of a candidate without receiving the personal particulars of the candidate within 7 days of receiving his nomination forms as indicated in section 31(3),” he said. “This is indeed a tragedy illustrating what Nigeria has become, that an individual is so powerful that the law has to be ignored to accommodate him. “Certainly, INEC printed nomination forms or High Court affidavits are, in no way or by any stretch of definitions, the same as personal particulars such as school leaving certificate.” The former aviation minister said the Jonathan campaign is convinced that Mr. Buhari “is not qualified to contest the 2015 presidential election.” *Source premiumtimesng]]>