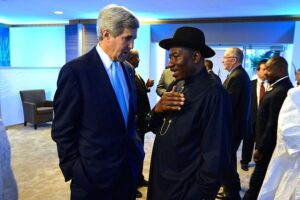 Levin whose book, ‘Dictators And Democracy in African Development, The Political Economy of Good Governance in Nigeria,’ has received rave reviews, saw the rise of the opposition as a mix of several factors including good governance pointing to Lagos and Rivers States, which until recently was under a PDP governor. He emphasised the opposition was leveraging on popular discontent as a result of poor delivery of democracy dividends with 70 percent of the population, by his studies, believing government was moving in the wrong direction as a result of poor economic performance. Yet he asked: “Can a 72-year old presidential candidate capture the imagination of 10 million new voters representing the youths, a new generation of Nigerians?” Sonny Iroche, an executive director of the Transmission Company of Nigeria (TCN) renewed his call for American investors to key into the power privatisation project which he admitted had suffered the projected turn-around as a result of poor development in gas infrastructure primarily because the unit price of $1.80 which has gone up to $2.50 remained a far cry to the price at the global market, making it difficult for investors to move their resources into the Nigerian gas industry.
*Source Allafrica/This Day
]]>