By Zacheaus Somorin with Agency Report 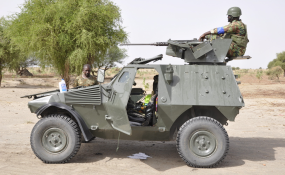 Relations between American military trainers and specialists advising the Nigerian military in the fight against Boko Haram are so strained that the Pentagon often bypasses the Nigerian military altogether, choosing to work instead with security officials in the neighbouring countries of Chad, Cameroun and Niger, the New York Times, in a report at the weekend, quoted US defence officials and diplomats as stating. Major rifts like these between the Nigerian and American militaries have been hampering the fight against Boko Haram militants as they charge through North-eastern Nigeria, razing villages, abducting children and forcing tens of thousands of people to flee. US Secretary of State, John Kerry, was in Nigeria on Sunday to meet with President Goodluck Jonathan and Major-General Muhammadu Buhari, the two leading candidates in the presidential election, and the Pentagon said that the Nigerian Army is still an important ally in the region – vital to checking Boko Haram before it transforms into a larger, and possibly more transnational threat. “In some respects, they look like ISIL two years ago,” Michael G. Vickers, the undersecretary of defence for intelligence, told the Atlantic Council last week, using another name for the militant group known as the Islamic State. “How fast their trajectory can go up is something we’re paying a lot of attention to. But certainly in their area, they’re wreaking a lot of destruction.” But US officials are wary of the Nigerian military as well, citing corruption and sweeping human rights abuses by its soldiers. US officials have also been hesitant to share intelligence with the Nigerian military because they contend it has been infiltrated by Boko Haram, an accusation that has prompted indignation from Nigeria. “We don’t have a foundation for what I would call a good partnership right now,” said a senior military official with the United States Africa Command, or Africom, who spoke on the condition of anonymity because he was not authorised to speak publicly on the matter. “We want a relationship based on trust, but you have to be able to see yourself. And they’re in denial.” The US was so concerned about Boko Haram infiltration that American officials have not included raw data in intelligence they have provided Nigeria, worried that their sources would be compromised. In retaliation, Nigeria in December cancelled the last stage of American training of a newly created Nigerian Army battalion. There has been no resumption of the training since then. Some Nigerian officials have also expressed dismay that relations between the two militaries have frayed to this point. “For a small country like Chad or Cameroun to come to assist” the Americans, “that is disappointing,” said Ahmed Zanna, a senator from Borno State, the epicentre of the Boko Haram insurgency. “You have a very good and reliable ally, and you are running away from them,” he said, faulting the Nigerian government. “It is terrible. I pray for a change of government.” The tensions have been mounting for years. In their battle against Boko Haram, Nigerian troops were alleged to have rounded up and killed young men in northern cities indiscriminately, rampaged through neighbourhoods and, according to witnesses and local officials, killed scores of civilians in a retaliatory massacre in a village (Baga) in 2013. Refugees said the soldiers set fire to homes, shot residents and caused panicked people to flee into the waters of Lake Chad, where some drowned.

But the allegations have been denied repeatedly by the military, which said the atrocities were committed by Boko Haram insurgents camouflaged in “stolen” Nigerian Army uniforms.They have also pointed to the recent attacks on Baga early this month as example of the atrocities committed by the terrorists. Last summer, the US government blocked the sale of American-made Cobra attack helicopters to Nigeria from Israel, amid concerns about Nigeria’s protection of civilians when conducting military operations. That further angered the Nigerian government, and Nigeria’s ambassador to the United States responded sharply, accusing Washington of hampering the effort. “The kind of question that we have to ask is, let’s say we give certain kinds of equipment to the Nigerian military that is then used in a way that affects the human situation,” James F. Entwistle, the US Ambassador to Nigeria, told reporters in October, explaining the decision to block the helicopter sale. “If I approve that, I’m responsible for that. We take that responsibility very seriously,” he said. All the while, Boko Haram has continued its ruthless push through Nigeria, bombing schools and markets, torching thousands of buildings and homes, and kidnapping hundreds of people. Now stretching into its sixth year, the group’s insurgency has left thousands of people dead, the overwhelming majority of them civilians. It killed an estimated 2,000 civilians in the first six months of 2014 alone, Human Rights Watch said, and many of Nigeria’s major cities – Abuja, Kano, Kaduna – have been bombed. US officials say that while it is unclear exactly how much territory Boko Haram effectively controls in Nigeria, the group is, at the very least, conducting attacks across significant parts of the North-east. “They reportedly control a majority of the territory of Borno State,” in North-eastern Nigeria, “and a significant portion of the border areas with Cameroun and Chad,” said Lauren Ploch Blanchard, a specialist in African Affairs with the Congressional Research Service. Even before the Nigerians cancelled the training programme in December, US military officials were concerned when soldiers showed up without proper equipment. Given the nation’s oil wealth, the US attributed the deficits to chronic corruption on the part of Nigerian commanders, saying that they had pocketed the money meant for their soldiers. “It’s not like they don’t have the money,” the senior Africom official said. “There are some things that we require to be good partners. The first of which is a commitment on the part of the Nigerian government to support its own army. They have a responsibility to provide adequate pay, to take care of their people, and to equip them.” “None of those empty allegations have ever been proved,” said Chris Olukolade, a spokesman for the Nigerian military. “The Nigerian military has always been receptive of honest support or assistance from well-meaning friends or partners. No one should however seek to use this security situation to usurp our sovereignty as a nation,” he added. After Boko Haram made international headlines last April by kidnapping more than 200 schoolgirls, the US flew several hundred surveillance drone flights over the North-east to search for the girls, but those missions were unsuccessful. When the Pentagon did come up with leads, American military officials said, and turned that information over to Nigerian commanders to pursue, they did nothing with it. But this again was refuted by the Nigerian military as “patently false”. The frustrations between the two sides have broad implications for the fight against Boko Haram, US officials said, including making it harder for other international partners who have joined the effort. “We are trying to work closely with the French and the Americans in support of the Nigerian military and government against Boko Haram,” a senior British diplomat said. “A rift between one of our two partners and the Nigerians is not a good thing.” *Source Allafrica/This Day
]]>