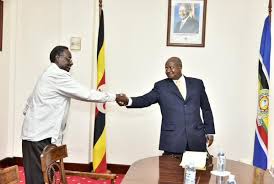 President Museveni has accepted to retire Gen David Sejusa from the army after a meeting at State House Entebbe yesterday. He also ordered Military Police to leave Sejusa’s home in the city suburb of Naguru which they had surrounded since Friday morning.

Gen Sejusa’s lawyers told Sunday Monitor at his residence after returning from State House Entebbe that the meeting lasted about 40 minutes.
They said it was attended by former army commander Gen Elly Tumwine, Gen Sejusa, his lawyers Michael Mabikke and David Mushabe, the Chief of Legal Services in the Uganda Peoples’ Defence Forces Brig Ramathan Kyamulesire and at least five of the President’s aides.
Reading a statement from Gen Sejusa, the lawyers said the President instructed Brig Kyamulesire to immediately start the process of retiring Gen Sejusa from the army. Sejusa’s application for retirement was received last week and the army’s Commissions and Promotions Board has up to three months (90 days) to give its decision.
On Thursday, Sejusa rejected an invitation for talks by Mr Museveni, demanding that the President first retires him from the army. On Friday, Sejusa again refused to talk to Mr Museveni by telephone and castigated the Commander-in-Chief for refusing to retire him when he allowed his brother Gen Salim Saleh and other senior officers to leave military service. He reiterated that he could only talk to the President after retirement.
But this lasted up to yesterday morning. By 2pm the situation had changed and Gen Sejusa had been chauffeured to State House in Entebbe for talks with the President. A calm looking Museveni entered the State House boardroom and after exchanging greetings with Gen Sejusa, he asked: “What issues do you want to discuss? I have been reading a lot of things in the newspapers. This is a small a matter. We have handled bigger issues before.”
Gen Sejusa, clad in civilian attire, then informed the President about Military Police deployment at his Naguru home and reiterated his demand to retire from the army.
Museveni, dressed in a suit then took the meeting through events leading to Sejusa’s return from exile in London on December 14, dispelling speculation that he had struck a negotiated deal with Sejusa.
“I had not commented on the return of Gen. Tinyefuza, I have seen a lot in the papers. I want to use this chance to sort out facts for the public,” Museveni told the meeting. “I sent them to contact Gen. Tinyefuza if he wanted to come back regardless of what had happened and sort out all the confusion arising out of his stay in London. He agreed to come back at his own cost. I said I will see how to ensure his entry.”
The president dismissed earlier claims by Uganda Media Centre boss Ofwono Opondo that the government had purchased Sejusa’s ticket from London to Entebbe.
“I had seen in papers that he has been bribed, he was given money. That is not true. We actually wanted to give him an air ticket but he said no,” Museveni said.
Museveni sat at close range with Sejusa, who accused his government of sending hit men to kill him in London on three occasions and has since his return called for regime change at all costs.
Museveni revealed Sejusa’s return was a highly secret affair. “Because I didn’t tell anybody, I didn’t want him to be harassed. That is why I sent Brig. [Ronnie] Balya to go there at Entebbe Airport and wait for him. On the day he was coming, I had travelled to Abu Dhabi,” Museveni narrated as Sejusa nodded in approval. After the meeting, the President bade Sejusa and his team farewell.
“What we witnessed was a lot of diplomacy, there was no exchange of fire but a give and take situation and that is why they said each side should desist from issuing inflammatory statements against each other,” Mushabe told Sunday Monitor after the press conference at Sejusa’s residence at 5pm. 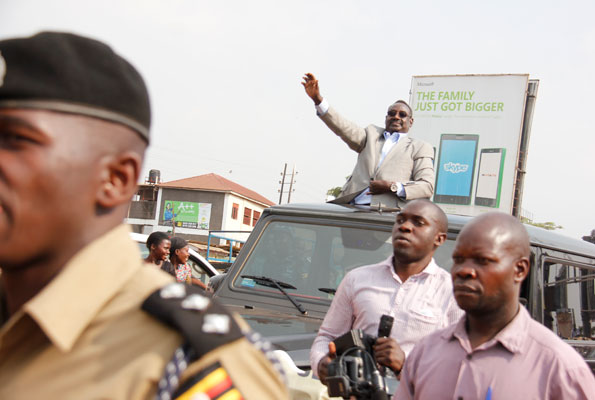 Describing the meeting as successful, Mabikke added: “What we wanted to ensure is that the army be removed from Gen Sejusa’s home because he had to move unhindered. As a Ugandan citizen, he must have access to basic needs, receive friends and guests, his pastors, doctors and all that. As far as that is concerned, this meeting has made headway in that the President has directed the army to be removed.” The lawyers said it was also agreed that Sejusa stops the public outbursts he has been making against the government and the President.
A few hours earlier in the morning, Mr Museveni had appeared on the Capital Radio’s Capital Gang talk-show and said Sejusa would shut up on his inflammatory public outbursts against the government. He had been asked by a caller why the government had not arrested Sejusa for making such statements in public.
Museven asked the public to be patient and wait to see how Sejusa would be handled. “Regarding General Sejusa, he is making public statements that must stop. Just wait and see how it will be handled,” Museveni said at the talk-show.
Sejusa had made various public statements condemning Museveni’s NRM government as a dictatorship and rallied groups opposed to the establishment to join hands for regime change. He also declared he would not reconcile with or apologise to Museveni, insisting there were serious outstanding issues to resolve between him and the state. *Source Monitor