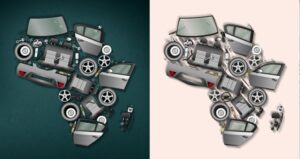 IMAGE©EMERIC THÉROND FOR TAR[/caption] A few African governments are seeking to attract international investors and link up to global value chains. Exporters and outsourcing operations can create much-needed jobs for the millions of young Africans entering the workforce each year. With unnatural precision and surprising grace, a mechanical claw dances around a half-metre piece of metal, neatly pouring lubricant down one side and welding it shut in a final flurry of sparks. An auto part falls into a waiting bin. A youngish woman grabs a fresh piece of metal, slots it carefully into the waiting maw and stands back. Again, the robot waltzes. The factory belongs to SNOP, a French auto-parts supplier to another French company, Renault. Both have opened factories in Tangiers, northern Morocco, tempted by tax breaks and good logistics in free trade zones that sit alongside training institutes built to deliver the required skills to work in these specialised manufacturing operations. It represents Morocco’s attempt to break into one of the world’s richest value chains. The combined revenue of the top two automobile makers, Volkswagen and Toyota, approached half a trillion dollars in 2013, roughly the gross domestic product of Nigeria. The great decline in transport costs in the past 30 years, made possible by things like the standardisation of shipping container lengths, has made it ever more profitable for companies to outsource various parts of their production and other processes. Hence an Airbus A380 includes pieces made in many different countries, including Morocco and Tunisia, assembled in another and serviced in yet another. This dense network of suppliers is the Airbus global value chain. China’s shift With 13 million young Africans hitting the job market every year, there is both a huge opportunity and a huge challenge. The chairperson of the AU, Nkosazana Dlamini-Zuma argues that this is a pivotal movement for the continent, telling delegates at the EU-Africa trade summit that “as China moves up the value chain, Africa is poised to seize the opportunity to become the next hub of textile production.” Africa has already started the journey. Egypt has had success in integrating into the Microsoft value chain for example, with Egyptian companies helping to repackage the software giant’s programmes for the Middle Eastern market. Lesotho and Mauritius both supply major clothing retailers in the US and Europe. Kenya and Ghana are taking on some of the back-office and call-centre functions of multinationals. Regional value chains are important, too: South African retailers are starting to catalyse value chains in African agriculture, for example. The first hurdle is well known: infrastructure. To pull in foreign investors, many countries globally and in Africa choose to create special economic zones (SEZ), enclaves well endowed in power, water and transport links in which foreign companies can work isolated from predatory and badly run national bureaucracies. Ethiopia’s nascent textiles sector and Morocco’s auto, aeronautic and electronic sectors use this model, while South Africa created a new SEZ law in May 2014 to reorganise its own zones. Domestic companies obviously face the same infrastructure con- straints. “Forty per cent of our production costs are power, when it should be under 10%”, says R.I. Odiah, managing director of Bennett Industries in Nigeria, which manufactures light fittings. From his vantage point on the executive committee of the Manufacturers Association of Nigeria, he sees other problems that resonate across the continent. A lack of funding is one of them. Banks in Nigeria rarely lend for more than a year, whereas manufacturers often need to import raw materials, process them and then sell products, “so we need a period of cost recovery,” says Odiah. In Nigeria, there is only one bank devoted entirely to manufacturers, the Bank of Industry. Cost effect Taxation is also an issue, for similar reasons. While traders, who make up the bulk of economic operators in Nigeria, can turn a quick profit, the cash conversion cycle for manufacturing is longer. These business-climate concerns are not static. An August 2014 report by the Boston Consulting Group explains that the new world is no longer set into two manufacturing zones, one expensive the other low-cost: “Who would have thought a decade ago that Brazil would now be one of the highest-cost countries for manufacturing— or that Mexico could be cheaper than China?” The appreciation of Brazil’s currency and rising costs hurt the country’s attractiveness for manufacturers.