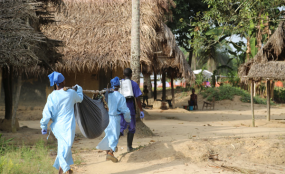 Photo: United Nations World Food Programme
MSF health team in the village carrying a suspected Ebola patient.[/caption] A research scientist of Liberian origin, Dr. Dougbeh Chris Nyan, has invented a diagnostic test that can detect and distinguish seven different viruses at the same time. The viruses include HIV, hepatitis viruses, and another virus called Dengue hemorrhagic fever virus (which has similar symptoms like the Ebola virus) infection. As lead-inventor, Dr. Nyan developed the test while working at the Laboratory of Emerging Pathogens at the US Food and Drug Administration (FDA) in the United States of America. The test is what scientist called a rapid procedure that can give test-results in less than one hour by using the patient blood samples. According to the US Federal Registry publication of October 15, 2014 entitle “Quantitative Multiplex Methods for Rapid Detection and Identification of Viral Nucleic Acids”, the test has been patented by the US government. Information available to the FDA and the NIH technology office, the US government may have an interest in filing an international patent application for Dr. Nyan’s inventions. Already, part of the test in diagnosis of Hepatitis B virus was published in May 2014 in a journal, called Clinical Infection Diseases. The test, which also has the capability of detecting Ebola virus and other tropical infections could be useful in countries that are now affected by the present Ebola epidemic. Ability for rapid diagnosis is a problem in many poor countries and places that do not have advanced health care systems.

Thus, this test is a major development that could empower health care workers with a quick means of diagnosing many viral diseases in countries with less resources. Dr. Nyan, who testified on September 17, 2014 to the US Congress on the Ebola crisis in West Africa also works as an unpaid volunteer with the Diaspora Task Force on the Ebola Crisis, with which he serves as Director of its Secretariat. The Diaspora Task Force has carried out medical relief supplies to the Ebola affected region and is recruiting Diaspora medical personnel to send them to work in the region. Also, Dr. Nyan is championing the creation of institute for disease control in Liberia and the region as a post-Ebola public health measure. A German trained medical doctor, Dr. Nyan also worked at the National Institutes of Health where he was trained in biomedical research. It can be recalled that Dr. Nyan in 1999 at the NIH developed a non-invasive diagnostic test for Helicobacter pylori infection. In a scientific environment where minorities and people of African descent are disadvantaged, Dr. Nyan hopes that his intellectual property rights will be fully protected and that the product of his invention will serve the poor and needed populations in society. *Source Allafrica]]>