The BBC World Service released an interview on Thursday with the former United Nations Secretary-General, who spoke on ending the Boko Haram insurgency and why the recent terror attack in Paris caught the world’s attention [caption id="attachment_15622" align="alignleft" width="300"] 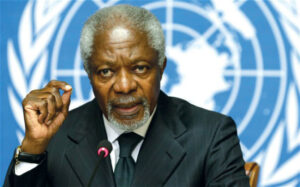 Former U.N Secretary General Kofi Anan speaks on recent terror attack in Nigeria and France. Photo: Reuters[/caption] “I think we have to be realistic, people always tend to pay more attention to dangers which are immediate to them…The nature of that attack in Paris caused lots of tension in Europe, other cities were saying, ‘What next?’” Kofi Annan said of the international community, and media, focusing more on the Paris attack rather than the Baga incident in which over one hundred people lost their lives. Ultimately, the sense of solidarity after the Paris attack kept the world’s attention there. The diplomat also spoke about his hope of seeing more solidarity among Africans instead of waiting on the world to solve the continent’s problems. Annan is in Nigeria to support the February elections, and spoke more about what needs to be done during the radio interview. Listen to his views about ending the Boko Haram insurgency here. https://soundcloud.com/bbc-world-service/annan *Source thisisafrica]]>