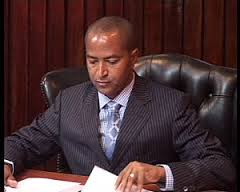 (Reuters) – Moise Katumbi, the powerful governor of Democratic Republic of Congo’s copper-producing Katanga province, has been removed as regional head of the ruling party, political sources said, highlighting a deepening rift with President Joseph Kabila. Local police and intelligence chiefs have also been summoned to the capital Kinshasa, senior officials said, in an apparent attempt to limit the political fallout following Katumbi’s return to Congo after a lengthy absence due to illness. Katumbi has long been considered a pillar of Kabila’s Katanga-centred power base. But he made a speech in Katanga late last month that was seen as a thinly veiled attack on Kabila, who has been in power since 2001 and under Congo’s constitution is required to step down in 2016 at the end of his second term. Couching his criticism in football references, Katumbi urged his supporters to challenge Kabila’s right to score a “third penalty” against Congo, a vast mineral-rich country of around 70 million people blighted by conflicts and corruption. Katumbi’s remarks represent the highest-profile challenge to a possible third term from within Kabila’s own People’s Party for Reconstruction and Democracy (PPRD). Katumbi is one of the few political figures with nationwide appeal due in part to his ownership of one of Congo’s top football teams and could mount a major challenge for the presidency if he were to run in next year’s polls. HOLDING ON? Political analysts and opposition leaders expect Kabila to attempt to stay in office beyond 2016 by either revising the constitution or delaying the elections. In a meeting with Katanga local chiefs on Monday, Kabila sought to play down his ambitions, saying he would not be distracted from the task of governing by speculation about the 2016 election. Kabila took power in 2001 after his father, Laurent, was assassinated in the middle of a conflict between the government and rebels that had sucked in regional armies and killed millions of Congolese. He steered Congo to post-war elections in 2006 and won re-election in 2011, although the second vote was marred by complaints of widespread irregularities. Some opposition activists across Africa have been emboldened to oppose their rulers by events in Burkina Faso, where protesters ousted President Blaise Compaore last October after he sought to extend his 27-year rule. But African governments have also been quick to quell copycat protest movements. On Tuesday, Martin Fayulu, president of a Congolese opposition party, said several of his supporters had been arrested while calling for an anti-government protest. *Source Reuters]]>