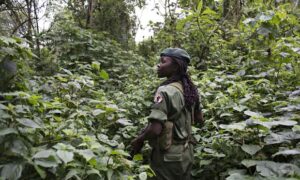 A female ranger in Virunga national park. Photograph: Monique Jacques[/caption] A Kalashnikov, a cartridge magazine, some spare casings and a pink plastic hand mirror are strewn across Francine Bwizabule Muhimuzi’s roughly made bed at the staff accommodation on the edge of Virunga national park. She is one of the first tranche of women who last year became rangers – “gardiens du parc” – at Africa’s oldest national park. Muhimuzi has just returned from a week stationed halfway up Mount Nyiragongo, one of the world’s most active volcanoes. “I’d see the volcano as a child from Goma, but I never thought I’d go up there,” she says. Today, she makes the 2,000m ascent, Kalashnikov on her shoulder, without breaking a sweat. “There is not yet equality, but in the park, we see it is improving, because they have begun to recruit women.” The 27-year-old, who was forced to flee her home in Bukavu, South Kivu, in 2004, when CNDP rebels took the town, says she is putting her career first; marriage is not in her plans right now. “I had nothing, and to get married with nothing? Men would be walking all over me.” With few jobs available in the Democratic Republic of the Congo, many women work in the informal sector, where income is erratic and benefits such as holiday and maternity leave don’t exist. There are only 300,000 formal private-sector jobs for the whole country, with a population of 68 million, according to the World Bank. Growth in the east of the country has been particularly stunted by insecurity and poor infrastructure. Around Virunga, in North Kivu, formal work opportunities are largely limited to jobs with non-profit organisations, battling nepotism to secure a job as a public servant, or joining the army, where living conditions are notoriously bad, and wages poor and irregularly paid. Born into a polygamous family, Muhimuzi is the youngest of 21 children from four wives. Having a career, she says, means she will have fewer children: “just four”. Congo has one of the highest birth rates in the world, and is reliably in the top 10 for teenage pregnancies, according to the World Health Organisation, a significant factor in the high maternal mortality rate; 730 women die for every 100,000 live births, according to World Bank figures. Virunga national park, a state institution, is widely seen as an exemplary public employer. Rangers are paid twice what the government allocates them, thanks to donor support, and living conditions are good. Rangers’ working hours are long – they often work 24-hour shifts – but they say wages are generally paid on time, while holidays and days off are well regulated, and the park now provides for maternity leave in the rangers’ contracts. By the end of last year, 14 women had graduated from the gruelling six-month ranger boot camp. Doing the same exercises as men, they learned all the skills needed to protect the park, from close combat to securing zones. The threats they must prepare for include encounters with armed groups and poachers, looting and the illegal invasion of protected land. It can be dangerous work: more than 150 rangers have been killed in the line of duty. [caption id="attachment_15732" align="alignright" width="270"] 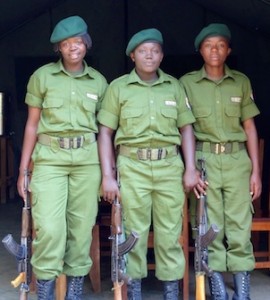 From left: Francine Bwizambule Muhimuzi, Germaine Kahambu and Alina Masika Kisambya. Photograph: Virunga national park[/caption] But for 25-year-old Alina Masika Kisambya, the attraction of the job outweighed the risk. As a child, she was captivated by the region’s dense forest. “You see it from the outside, and it so beautiful. I wanted to know its secrets,” she says, while accompanying tourists on a gorilla trek. When, two hours into the forest, an exuberant blackback beats his chests and launches a mock charge on the tourists, Kisambya swiftly moves into his path. She bends down and beats the ground, grunting gently. The gorilla relaxes immediately. Alina once faced an aggressive lone buffalo, among the most deadly mammals in Africa, but wasn’t afraid: “This is what I’ve been taught to do.” Women have applied to be rangers in the past, but the 2014 graduates were the first to pass the selection and complete the training, run by former Belgian commandos. Gilbert Dilis, the security officer for Virunga and an ex-commando himself, describes the first four women to pass, including Muhimuzi, as “very motivated”. One, he says, has already proved she has the authority to lead a section on the field. Male ranger Andre Bauma says some unemployed men are not happy about women getting jobs while they remain jobless, but claims the majority are pleased. “It’s an education for the other girls to understand how they can take charge of themselves and become independent. It’s the beginning of equality in our region.” * Source theguardian .The International Women’s Media Foundation supported Jessica Hatcher’s reporting from the Democratic Republic of the Congo]]>