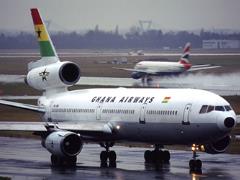 The much anticipated new national airliner is expected to take off by March this year. That would happen after accounting firm PricewaterhouseCoopers presents its interim report on the proposed national carrier to government. The firm was contracted in 2014 to work out modalities for the new carrier for the country. Deputy  Transport Minister, Joyce Bawah-Mogtari, confirmed to Joy Business government’s plans to have the new airline airborne in March 2015. She said PricewaterhouseCoopers is going to advice on credible strategic investors in the airline. “Chances are it might be an existing airline with a seriously obvious brand…it might be one of our domestic carriers that is willing to partner government to bring back this airline”, said Bawah-Mogtari. She said although the time looks short, government is committed to ensuring the national airliner takes off in March. “Three months is a long time for a lot of things to happen and government has actually indicated its preparedness to this in the shortest possible time”, she said. *Source Modern Ghana]]>