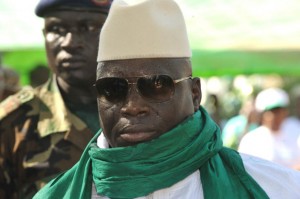 President Yahya Jammeh has ruled Gambia, an impoverished state that runs along the Gambia River, for 20 years and has been widely accused of human rights violations (AFP Photo/Seyllou)[/caption]

Witnesses said the troops, who also set up checkpoints on roads leading out of the coastal city, were searching for suspects from Tuesday’s assault on the presidential palace.

The attack, which was repelled by the security forces, took place while Jammeh was on a private visit to Dubai, diplomatic and military sources said.

“Gambian soldiers carrying guns are conducting a house-to-house,” a woman living in Banjul told AFP, asking not to be identified. “They believe the attackers are still hiding in the capital.”

Residents in other neighbourhoods also reported houses being searched.

A fisherman, who also requested anonymity because of the climate of fear in the city, said he had been warned by relatives not to head back with his catch to the usual dock outside Banjul because “members of the armed forces and the paramilitary are lying in ambush in the creeks at Denton bridge and Old Jeshwang.”

Military and government officials were not available for comment.

An intelligence services source said Thursday that dozens of people had been arrested in connection with the pre-dawn attack, which was carried out by heavily armed men travelling in a dugout.

Gambian military sources said the coup was led by a captain who deserted the army and who was killed along with two other assailants.

Jammeh, 49, who himself took power in a coup, has ruled the tiny country which runs along the Gambia river for 20 years.

His presidency has been dogged by accusations of human rights violations.

On Thursday he accused unidentified foreign forces of attempting to unseat him and insisted that his army was “very loyal.”

Ibn Chambas, who is due to visit Gambia soon, called on the security forces “to ensure that the investigations are conducted in full respect of human rights and regular legal process”.