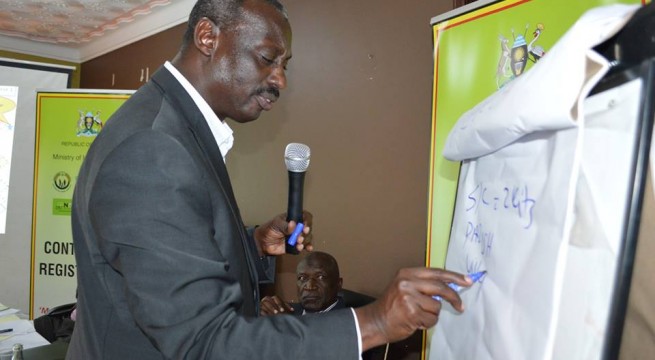 Minister Aronda launched the exercise on Friday[/caption] The Minister of Internal Affairs, Hon. Gen. Aronda Nyakairima, has flagged off a countrywide exercise in which non-citizens, who have resided in Uganda for an aggregate period of more than twenty years, will apply for citizenship by naturalization. The naturalization exercise will commence tomorrow Monday 19th January 2015, and end on 18th February 2015, and shall target eligible persons who are spread out in at least eighty (80) districts of Uganda. The flagging off ceremony took place on Friday 16th January 2015, at Kololo, Kampala, and was witnessed by officials from the Ministry of Internal Affairs, members of the National Citizenship and Immigration Control Board, and officials of the National Security Information System (NSIS) Project. Gen. Aronda explained that naturalization is a legal process by which a non-citizen can apply to become a citizen of Uganda, and emphasized that citizenship will be granted to applicants who meet the conditions set out in the laws of Uganda. The process is provided for under Article 12 of the 1995 Constitution of the Republic of Uganda and Section 16 of the Uganda Citizenship and Immigration Control Act, Cap 66. Gen Aronda emphasized that applicants for citizenship by naturalization will have to fulfill all the five conditions stated in the laws. Hence an applicant must have lived in Uganda for 20 years, and must be a resident in Uganda continuously for a period of two years prior to the date of application. “The law also requires the applicant to have knowledge of a local language or English and be of good character. An applicant will also have to prove that once naturalized, he/she intends to reside permanently in Uganda,” he said The Minister further explained that the naturalization exercise will be based at the sub county and eligible persons will access and fill out the mandatory forms. He assured the target communities, that the National Citizenship and Immigration Board had designated immigration officers to verify the applications and approve those who qualify to be granted citizenship by naturalization. Processing of the application will be done on the same day and qualifying persons will be issued with certificate of naturalization as a citizen of Uganda, under Article 12 of the Constitution of the Republic of Uganda and Section 16 of the Uganda Citizenship and Immigration Control Act, CAP 66. Gen. Aronda warned persons who wish to apply for citizenship by naturalization to desist from declaring false information regarding their eligibility. He particularly clarified that refugees are not eligible to apply for citizenship by naturalization, and should not attempt to participate in the exercise. During the exercise of registering Ugandan citizens for the National Identity Card, registration officials rejected a number of applications in various parts of Uganda, on grounds that the applicants were non-citizens. This includes people like the Maragoli who settled in Kiryandongo District and have resided in Uganda since 1956. This exercise is hoped to enable several other non-citizens, like the Maragoli, who have resided in Uganda for more than twenty years, to acquire Ugandan citizenship by naturalization. *Source chimpreports  ]]>