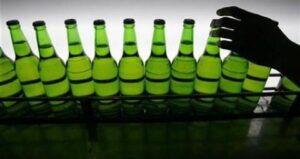 Photo©Reuters[/caption] Heineken is betting on Ethiopia’s rising incomes to fuel rapid expansion of the beer market in Africa’s second most populous country, where the group is the first of the big international brewers to build a new plant. Ethiopia’s average annual beer consumption of some 5 litres per capita is about half the average level for sub-Saharan Africa, excluding South Africa, offering scope for expansion among the population.

Heineken’s African and Middle East regional president Siep Hiemstra said in an interview on Monday that Ethiopians were used to fermented drinks and also grew barley, used in beer making. “It’s a country, where as a brewer, you believe you should be there … One can expect that there will be rapid expansion of the brewing industry,” he said. Ethiopia’s economy is expanding at about 9 percent per year, sturdy growth that led to its debut $1 billion Eurobond being oversubscribed last month. The world’s major brewers have turned to emerging markets such as Africa for growth because consumer spending in Europe is sluggish and the United States offers only limited expansion opportunities. Heineken is the market leader in Europe, responsible for half of group revenue and about a third of its operating profit in the first half of 2014. But the company has significant exposure to Africa, Latin America and Asia. Heineken has bought numerous plants in Africa and built two, one in Nigeria in 2000 and another in South Africa in 2008. It has been gradually ramping up its new plant in Ethiopia since July. The 110 million euro ($130 million) brewery, with a capacity of 1.5 million hectolitres, is the largest in the country and located near the capital Addis Ababa. The new facility adds to the Bedele and Harar breweries, each some 500 kilometres from Addis Ababa, that Heineken bought from the state for a combined $163 million in 2011. Hiemstra said the new brewery would initially focus on local brands Hamar and Bedele, but could start producing the premium Heineken brand next year. Heineken is the number two player in Ethiopia, where its competitors include Diageo, which acquired Meta Abo Brewing in 2012 for $225 million and market leader BGI, a long-standing player bought by French drinks company Castel in 1990.
*Source theafricareport
]]>