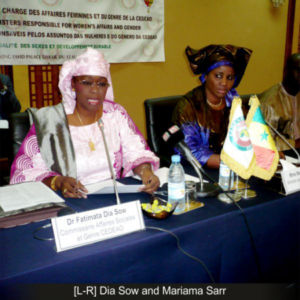 MARIAMA Sarr, Senegal’s minister of Women, Family and Child Protection, has commended the ECOWAS Commission for its initiatives in the promotion of gender equality and sustainable development within the region. At the opening of the regional gender experts’ meeting in Dakar, Senegal, January 12, Sarr said the Commission’s gender programme activities are aimed at providing community citizens – men and women – with the opportunity and capacity to benefit from human security and development. “Such a move demonstrates a new era of fundamental strides and establishing innovative approaches towards a future, desired by West African women and girls,” the Minister said, while acknowledging the respect for women’s rights and promotion of gender equality set out by ECOWAS as a fundamental principle for building a fairer society. She said the principle governing the daily life and activity of communities and institutions was anchored on poverty eradication as a basis for the achievement of regional socio-economic development, peace and security. Fatimata Dia Sow, ECOWAS Commissioner for Social Affairs and Gender, in her address, attributed the significant progress achieved over the last 10 years on gender equality to the endorsement and validation by African leaders of various protocols and international instruments, and the regional policy for gender-related issues developed by ECOWAS and adopted by Member States. While all member states have mechanisms and policies for the promotion of gender equality, the commissioner, however, noted that much effort is still required to turn various opportunities for sustainable development into reality. Kate Bob Milliar, representative of Ghana’s Minister for Women Affairs, whose country currently chairs the ECOWAS Authority, pledged Ghana’s commitment to work towards gender equality in the region and the eradication of the Ebola Virus Disease. The meeting considered and propose for adoption, a number of regional instruments and documents on gender equality and sustainable development. These include the Draft Supplementary Act on Equality of Rights between Women and Men for Sustainable Development within the ECOWAS Region, the Draft ECOWAS Plan of Action on Gender and Trade, and the Draft ECOWAS Gender and Migration Framework and Plan of Action. The meeting also evaluated achievements in gender equality and identify key projects and programmes for the empowerment of the West African women. Also, on the agenda of the four-day experts meeting were the Accra Declaration on Social Protection, situation of the 200 school girls abducted in Chibok, northern Nigeria in April 2014 by the Boko Haram terrorist group, implementation of the ECOWAS Gender Policy, Report on the Gender situation in West Africa in 2014, and the response to the Ebola virus epidemic in the region. *Source Real Magazine]]>