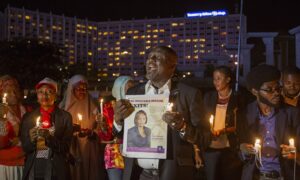 People at a vigil in Abuja hold a picture of Ameyo Adadevoh, who died after contracting Ebola while treating a Liberian-American, Patrick Sawyer. Photograph: Afolabi Sotunde/Reuters[/caption] The epidemic has exposed weak healthcare systems and left nearly 3,500 dead, but far more might have died if not for the courage of local health workers The day, 21 July, began like any other Monday for Ameyo Adadevoh, a doctor in Africa’s most populous city, Lagos. In a crowded midtown district, the usual jumble of patients awaited at the hospital where Adadevoh was known to sometimes give free drugs to those who could not afford it. Among them was a patient who had been wheeled in the previous evening, feverish and vomiting, diagnosed with severe malaria. In fact, Liberian-American civil servant Patrick Sawyer had slipped through three layers of security – a quarantine order, and airport checks in Liberia and Nigeria – intended to stem an outbreak in three west African countries. Within 24 hours, he became Nigeria’s Ebola patient zero, the small hospital was forced to become a makeshift Ebola ward, and Adadevoh, an endocrinologist, found herself thrust into the role of stopping the disease’s spread in the continent’s most populous country. That Nigeria has so far emerged relatively unscathed from its brush with Ebola owes much to the quick-thinking staff at an ordinary family clinic, who put themselves in the firing line for six days before the government was ready to relocate him. And, as elsewhere in this epidemic, those on the frontline paid the highest price: four of the seven fatalities were health workers, including Adadevoh. “We tried everything we could. Any way we could get her out, any medicine; everybody was trying,” said her son, Bankole. “The saddest part is that she stayed here in Nigeria to run a health centre people could trust, and it’s the Nigerian system that let her down in the end.” Even in specially equipped isolation wards, the slightest slip-ups – whether through poor equipment or inadequate training – can be deadly. Health authorities in Spain blamed substandard equipment for the infection of a nurse this week in Europe’s first recorded case. But while isolated cases will always be a risk even in advanced healthcare systems, overwhelmed hospitals in west Africa have become places of horror for patients and doctors alike. As the epidemic has exposed weak healthcare systems and leaderships in disarray, leaving nearly 3,500 dead in its wake, far more might have died if not for many local health workers soldiering on armed with little more than conviction and courage. This week, the bodies of Ebola victims were dumped in the streets when burial teams went on strike over pay, the Sierra Leone Broadcasting Corporation said. Health ministry spokesman Sidie Yahya Tunis said the situation was “very embarrassing” and that money was available to pay the teams. [caption id="attachment_15429" align="alignright" width="300"] 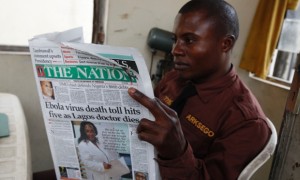 A local paper carries news of the death of Ameyo Adadevoh. Photograph: Sunday Alamba/AP[/caption] But recently an ambulance driver at Sierra Leone’s colonial-built Connaught hospital offloaded a suspected Ebola patient wearing only a plastic apron for protection. A trail of water flowed out of the open isolation unit door into corridors lined with posters of nurses and doctors who had died of the disease. “We really don’t have the equipment to feel 100% secure, but what else can we do? We need to help these people,” the ambulance driver said as he hosed himself down later. To safely manage a treatment centre of 70 beds, the World Health Organisation estimates that at least 200 medical staff are needed, of whom roughly a fifth should be foreign doctors who provide training and supervision. A belated surge of international aid has included engineers, medical kit and money, but boots on the ground are still lacking. Médecins sans Frontières, the non-governmental organisation leading efforts, said it opened its doors in Liberia for 30 minutes each day just to fill the number of beds vacated by survivors or the dead. Another western health NGO said fewer than 10 US doctors had volunteered, compared with more than 400 during the 2010 Haiti crisis. Meanwhile, the private grief of the families of more than 240 public health workers who have died has also had an alarming public impact: it removes pillars in already fragile health systems, shrinking the pool of talent from which to rebuild devastated healthcare systems when international organisations leave. Nigeria’s success shows how a determined response can nip an epidemic in the bud, despite early official inertia. Home to the village that gave Lassa fever – a haemorrhagic fever similar to Ebola and endemic in the region – its name, Africa’s largest economy did not have a single functional isolation ward when Ebola struck six months into the west African epidemic. So Adadevoh set up aggressive barrier nursing, organised the disinfection of the hospital, and downloaded and distributed Ebola factsheets. For six days, the clinic’s staff effectively ran an Ebola isolation unit with no government help. When Liberian presidential officials called to insist Sawyer be released to attend a conference – he was a high-ranking civil servant – the hospital refused to let him go. And when an isolation ward was finally set up, Adadevoh visited even as other doctors refused to volunteer to staff it. Meanwhile, the authorities’ slow revving into action eventually produced remarkable results. Drawing on a polio-surveillance system, health workers made 18,000 visits to 900 people to check the temperatures of possible contacts. In August, Adadevoh arrived at the isolation centre she had lobbied to improve. Eleven days after she died, Nigeria recorded its last Ebola case. “If anything comes of this, all we want is an improvement in healthcare, especially public healthcare, in Nigeria,” her son said. Elsewhere, the slow trickle of workers to replace exhausted international and local volunteers continues to take a devastating toll. Sierra Leone’s population of 6 million is served by about 120 doctors; those who have succumbed include the only haemorrhagic fever specialist. In Liberia, which has one doctor for every 70,000 people, the chief medical officer placed herself under quarantine after her office assistant died of Ebola this month. [caption id="attachment_15430" align="alignleft" width="300"] 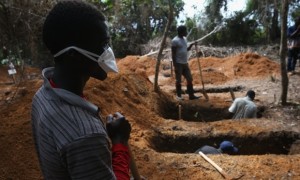 Grave diggers prepare for new Ebola victims outside an Ebola treatment centre near Gbarnga, central Liberia. Photograph: John Moore/Getty Images[/caption] The outbreak first began in Guinea in December, but it took two months to identify the unfamiliar illness ravaging isolated communities, where there is one doctor per 10,000 inhabitants. By the time Ebola made its blood-soaked landfall in neighbouring Sierra Leone, most health workers at the Kenema government hospital fled. Not so Sheikh Umar Khan. “For more than a week, he was the only doctor in the ward. He was finding it very difficult to get young colleagues to come in to work,” said Mohamed Barrie, a close friend of Khan’s since they met at medical school, and himself just one of three doctors serving a population of almost 600,000 in neighbouring Kono. Barrie last saw Khan at the ministry of health in June, where he was lobbying on behalf of health workers striking over unpaid salaries and dire working conditions. “He was trying to encourage the ministry on what they needed to do to build up trust and get doctors back in,” said Barrie. “It’s not easy in Sierra Leone. You work all these years without even running water in hospitals, and then you see a more junior doctor go into government and suddenly they’re building a house and have a new car.” Sierra Leone ranks 119th out of 177 on Transparency International’s corruption index and abiding suspicion towards officials meant many originally dismissed Ebola as a government hoax to plunder public coffers. Khan could not have foreseen that his own death would mark a turning point, as ordinary citizens finally accepted that a disease that felled one of the country’s most admired doctors had to be real. Ironically, Sierra Leone and Liberia invested the highest percentage of GDP on health in sub-Saharan Africa in 2012, at 15.1% and 15.5% respectively. But trust in the sector had been deeply eroded after a free maternal healthcare programme intended to lift the country from the bottom of global indexes had been beset by doctors and nurses secretly charging money. Last year, 29 top health officials were indicted for siphoning about half a million dollars from a childhood immunisation fund sponsored by the Gates Foundation. A spokesperson from the ministry of health said the indictments were a sign that corruption was being tackled. The government has put in $11.4m (£7m) towards a $26m Ebola fund, the spokesperson added. Still, doctors went on strike again in September after a fourth doctor, Olivet Buck, died in the capital, Freetown. [caption id="attachment_15431" align="alignright" width="300"] 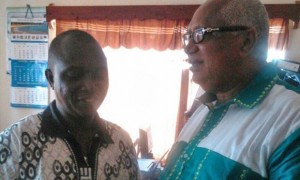 File photo of Sheikh Umar Khan, left, at an Ebola centre in Kenema. Khan, a leading doctor praised as a national hero for treating people with the disease, died from Ebola. Photograph: Uncredited/ASSOCIATED PRESS[/caption] “She was bemoaning that they didn’t have enough gloves, protective suits, that kind of basic thing. She felt the lack of political will to tackle public health issues was a powder keg waiting to explode in one way or the other,” said her brother Albert, a GP based in the UK. “There’s just inertia and a lack of looking into ourselves to find the solutions.” Recently, Buck had told her brother about fuel money for ambulances being diverted. “They were always having to find a way to make do,” he added. Albert’s dream of retiring back in Freetown, surrounded by his childhood memories and family, were shattered by his sister’s death. “She was a hero. She died on the battleground. She and others should be held up – these are quiet heroes,” he said. A week before his death, Khan had called the Barrie family. “This is my fight, this was what I’m trained for, and I need to fight it to the end,” he said. The morning Khan died, he was propped up in bed cheerfully listening to his radio before a presidential visit, said Vandy Cawray, a health official who was at his bedside. After weeks of mounting pressure, President Ernest Bai Koroma was making his first visit to the Ebola-hit east. “The last thing he said to me was, ‘soon I’m going to eat sharwarma again’, because he was getting some appetite back,” Cawray recalled. But Khan died as the president was slowly putting on gloves to enter the isolation ward. *Source theguardian]]>