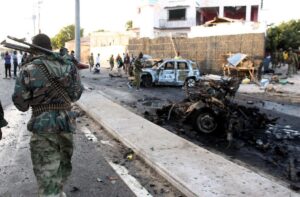 A Somalis soldier patrols near the wreckage of cars after a suicide car bomb blast on January 4, 2015 in Mogadishu (AFP Photo/Abdifitah Hashi Nor)[/caption] Mogadishu (AFP) – East African foreign ministers met in Mogadishu on Saturday to push peace efforts in war-torn Somalia, the first time the regional bloc has met in the country for almost three decades.

Dozens of heavily armed soldiers and police patrolled the streets, where Al-Qaeda-affiliated Shebab militants regularly carry out bombings and killings.

Ministers from Djibouti, Ethiopia, Kenya and Uganda — who have contributed troops to the 22,000-strong African Union force in Somalia — all took part in the one-day meeting, organised by the regional IGAD bloc, the Intergovernmental Authority on Development.

Held in a heavily guarded hotel near the main government district in Mogadishu, it was one of the largest and highest profile meetings in the capital for years.

Key issues included security and political reconciliation within the Horn of Africa nation, riven by conflict since 1991.

Somali President Hassan Sheik Mohamud described it as “an important regional event” that took place in the country “for the first time in 28 years.”

Amid constant threats of Shebab attacks, the president took to national television appealing to citizens that “IGAD is a guest of the Somali people.”

Leaders including UN chief Ban Ki-moon have visited Mogadishu in recent years, but important visitors rarely leave the fortified walls of the airport zone to travel through the dangerous city streets.

“We are very happy that Mogadishu is secure enough to host such an international conference,” said Abdirahman Duale Beyle, Somalia’s acting foreign minister.

The Shebab have also carried out attacks across the wider east African region.

The talks come after Somalia’s parliament last month endorsed Omar Abdirashid Ali Sharmarke as prime minister, following bitter in-fighting and a falling out between the president and the previous premier.

The United Nations, the United States and the European Union — key backers of Somalia’s fragile government — have all warned that power struggles were a damaging distraction for the country.

Much of Mogadishu was in lockdown on Saturday.

“They are complicating life for ordinary residents. Mogadishu is not yet ready to host international meetings,” said Ahmed Suleiman, a resident of the coastal city.

“Every important street is closed and that is the only thing they can do to secure the conference.”

Shebab fighters have staged repeated attacks in the heart of the government zone, including on the presidential palace, as well as on the airport, a vast base that houses several foreign embassies as well as the headquarters of the AU force.

The Somali government, which took power in August 2012, was the first to be given global recognition since the collapse of Siad Barre’s hardline regime in 1991.

Billions in foreign aid has been poured in, with the government initially hailed as offering the best chance for peace in a generation.

But, like its predecessors, it has since become mired in political in-fighting and corruption.