Activists urging president to resign clash with police in capital, resulting in four deaths, including officers. 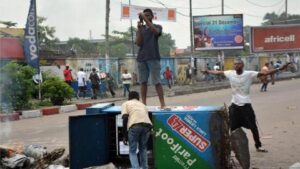 At least four people, including two policemen, have been killed in the Democratic Republic of Congo’s capital Kinshasa, after security forces clashed with thousands protesting moves that will pave the way for President Joseph Kabila to extend his hold on power, police say. At least 10 protesters were also injured after police fired live bullets to break up the rallies in some parts of the capital on Monday, witnesses said. Officers also used tear gas to disperse groups of rock-hurling youths as tyres burned at several main intersections and a police helicopter flew overhead. “Two policemen were killed by bullets,” government spokesman Lambert Mende said, adding that “two looters” had also died. According to hospital sources, about 10 demonstrators were admitted to hospital with gunshot wounds. The protesters had been called into the streets by opposition leaders outraged by proposed electoral legislation that would delay presidential and parliamentary polls beyond late 2016, when Kabila is meant to step down. Shots rang out from several places, including near the University of Kinshasa after police warned they would open fire if protesting students failed to leave, an AFP correspondent saw. Demonstrators called for Kabila “to leave at the end of his term”, while some carried signs saying: “Don’t touch the constitution”. Several cars were torched and witnesses said some looting had occurred on the fringes of the clashes. ‘Impounding democracy’ Streets were deserted in several parts of Kinshasa on Monday, with public transport interrupted and many children kept home from school. From 0700GMT, police and elite troops of the Republican Guard sealed off the parliament building, where the lower house passed the controversial bill on Saturday. Police also surrounded the headquarters of the third biggest opposition party, the Union for the Congolese Nation (UNC), after members of all leading opposition parties urged Kinshasa residents “massively to occupy” parliament on Monday to hamper the debate. “It is impounding of democracy by the political allies of Mr Kabila,” UNC president Vital Kamerhe said of the police presence around his headquarters. As darkness fell, calm returned to the capital. Kabila has ruled over the vast and troubled central African country since he was catapulted into office as a young soldier by Kinshasa politicians in 2001, days after his father, then president Laurent-Desire Kabila, was assassinated. In 2006, three years after multiple peace deals ended a bloody war which embroiled troops from at least six foreign countries, Kabila won the first free, democratic presidential poll since independence from Belgium in 1960. Elections that year were enabled by a large UN peacekeeping force first deployed during conflict. The results were considered largely fair, but when Kabila won a second and final five-year term in 2011, his victory was disputed by domestic and foreign observers. The opposition accuses Kabila of trying to delay elections by insisting that a new census must first take place – a process that analysts say would take as long as three years. *Source Aljazeera]]>