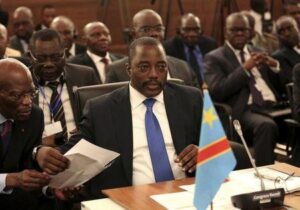 As anti-government demonstrations in the capital Kinshasa entered their third day, the leader of Congo’s Catholics, Cardinal Laurent Mosengwo Pasinya, strongly criticized any attempt to postpone a presidential election due next year.

Opposition supporters took to the streets on Monday to try to derail legislation that would require a national census before the vote. The opposition says the count would take years to organize in a poor nation the size of Western Europe, although the government denies this.

With more than 40 percent of Congo’s 65 million people describing themselves as Catholic, the Church’s stance is likely to bolster popular resistance to the reform. Western powers including France and the United States have called for restraint and backed timely elections.

The proposed change to the electoral code, approved by the lower house of parliament on Saturday, is expected to be voted on by the Senate on Thursday.

“We disapprove of and condemn any revision of the electoral law that aims to … illegally postpone the holding of the elections in 2016,” Mosengwo Pasinya said, adding that some politicians and the security services were stoking the violence.

“We condemn these actions that have caused deaths and make an urgent appeal: Stop killing your people; don’t march on the ashes of your compatriots,” his statement said. In Kinshasa’s main Mama Yemo hospital, witnesses said that members of the presidential guard entered a ward where wounded opposition supporters were being treated and opened fire, injuring several people. A government spokesman was not immediately available for comment.

Kabila came to power when his father was shot dead in 2001 and won disputed elections in 2006 and 2011. The constitution bars him from standing for a third term in next year’s ballot.

With several leaders in West and Central Africa reaching the end of their terms, Congo could set an important precedent.

Protests in Burkina Faso toppled ex-President Blaise Compaore in October when he attempted to scrap constitutional limits, but security forces in Congo are seen as less likely to cede to popular pressure.

In protests on Wednesday, police fired teargas at demonstrators at the university campus in the riverside capital Kinshasa, a Reuters witness said.

In the central neighborhood of Matete, a witness said security forces fired live rounds at protesters, who had erected barricades of burning tires and responded by hurling rocks.

Paul Nsapu, secretary general for Africa of the International Federation for Human Rights, said security forces killed at least 14 people on Monday and 28 on Tuesday in Kinshasa. “For the most part these people were killed while they were advancing to protest,” Nsapu told Reuters.

The government, which says that only 15 people have been killed, said most of the victims were shot by private security guards while looting businesses.

“This was only pillage, extortion, destruction and vandalism,” said government spokesman Lambert Mende.

General Abdallah Wafy, deputy U.N. special representative for Congo, denounced the use of the elite presidential guard to quell the protests and said the decision to shut down Internet connections in Kinshasa was an infringement on civil liberties.