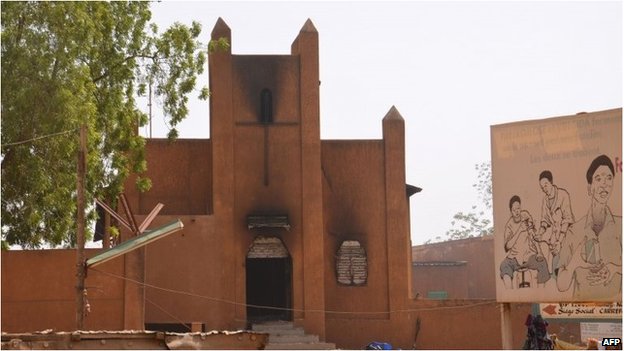 At least three people have been killed and six churches attacked in Niger amid fresh protests against French magazine Charlie Hebdo’s cartoon depicting the Prophet Muhammad.

Protests began outside Niamey’s grand mosque and reportedly spread to other parts of the country, a day after five were killed in Niger’s second city. Niger’s president condemned the violence and appealed for calm. Last week, Islamist gunmen killed 12 people at Charlie Hebdo’s offices. The cover of the magazine’s latest edition, published after the attack, featured a cartoon of the Prophet Muhammad weeping while holding a sign saying “I am Charlie”. Seven million copies of the edition are being printed in view of extraordinary demand, distributors announced on Saturday. The magazine’s print run before the attack was 60,000. Many Muslims see any depiction of Islam’s prophet as offensive. [caption id="attachment_15551" align="alignright" width="624"] 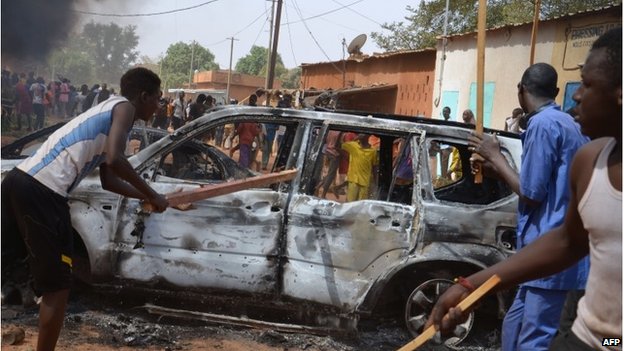 The French embassy has called on its nationals living in Niamey to remain at home[/caption] In Niger, a former French colony, hundreds of demonstrators gathered at Niamey’s grand mosque, shouting “God is Great” in Arabic. At least six churches were set on fire or looted in Niamey and regional towns. Bars, hotels and businesses under non-Muslim ownership were also targeted. Two charred bodies were recovered from a church on the outskirts of Niger, and the body of a woman was found in a bar, Reuters reported. ‘Everything has gone’ Pastor Zakaria Jadi, whose church was burnt down in the capital Niamey, said he was in a meeting with church elders when he heard of the attacks. “I just rushed and told my colleagues in the church to take away their families from the place,” he told the BBC World Service. “I took my family to take them out from the place. When I came back I just discovered that everything has gone. There’s nothing in my house and also in the church.” [caption id="attachment_15549" align="alignright" width="624"] 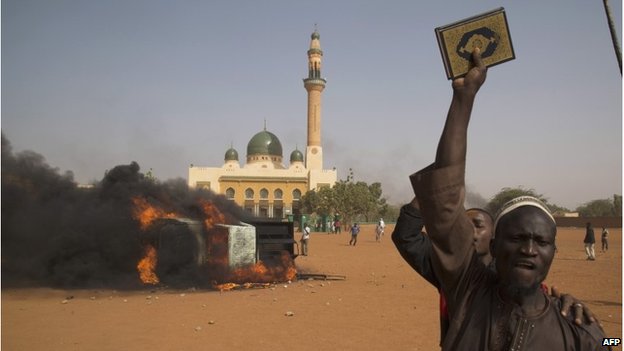 Police earlier fired tear gas to disperse some 1,000 youths in front of Niamey’s grand mosque[/caption] Niger’s President, Mahamadou Issoufou, was one of six African heads of state to attend a unity march in Paris after the attacks against Charlie Hebdo. “Those who loot these places of worship, who desecrate them and kill their Christian compatriots… have understood nothing of Islam,” he said after Saturday’s violence. During Friday’s demonstration in Niger’s second city, Zinder, protesters raided shops run by Christians and attacked the French cultural centre. The centre’s director, Kaoumi Bawa, said an angry crowd of around 50 people had smashed the building’s door and set fire to the cafeteria, library and offices. The death toll in Zinder rose from four to five when emergency services found a burned body inside a Catholic Church. Protests against the Charlie Hebdo cartoon were also seen on Friday in Pakistan, where protests turned violent in Karachi, the Sudanese capital of Khartoum and the Algerian capital, Algiers. People in Somalia took to the streets on Saturday. *Source BBC]]>