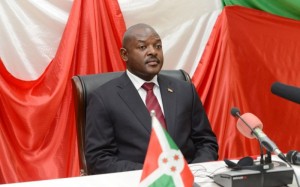 Burundi’s upcoming presidential elections set for June 2015 have been overshadowed by uncertainty and ambiguity, as current President Pierre Nkurunziza aims to stand for a controversial third term. The opposition views President Nkurunziza’s decision to run as a clear violation of article 96 of Burundi’s Constitution, which limits an incumbent to two five-year terms. Meanwhile, President Nkurunziza and his fellow ruling party loyalist of the CNDD-FDD (National Council for Defense-Forces for the Defense of Democracy) argue that Nkurunziza’s first term as president should not count as he was elected by the National Assembly acting as an electoral college and not a popular vote. The contention at the core of this issue is a legal one that has immense political implications. Burundi’s modern political history has been mired in inter-ethnic conflict and political rivalry between Hutus and Tutsis before the country’s independence in 1962. In 1993 Burundi held its first multiparty election ending military rule and ushered in a pro-Hutu government under Melchior Ndadaye; later that year he was assassinated in a failed military coup which plunged Burundi into a decade long civil war costing 300,000 lives. Despite a series of peace talks led by regional actors such as former Tanzanian President Julius Nyerere and South African president Nelson Mandela and numerous peace agreements, Burundi still remains fragile. Recently President Nkurunziza has contributed to this fragility by reducing the political space for dissent. This includes silencing free speech, sacking government officials who have criticized President Nkurunziza’s decision to run in 2015, and arming Imbonerakure (youth wing of the CNDD-FDD) to intimidate and commit violence against members of the opposition. These actions have severely weakened the opposition. Leonce Ngendakumana, chairman of the opposition coalition Democratic Alliance for Change (ADC), was charged with slander against the ruling party and sentenced to a year in prison. The modus operandi for the CNDD-FDD is apparent: clear the political field for President Nkurunziza’s reelection with impunity. Events leading up to Burundi’s presidential elections have hinted toward a trajectory of a renewed civil war, as echoed by journalists and analysts alike. Indeed there are legitimate reasons to be concerned over the current political war being waged by the ruling party; however it is not too late for Burundi to avert an arc toward bloodshed. President Nkurunziza would need to take a number of significant steps to improve the situation: loosen the political stronghold in Burundi and allow for other political parties to promote their platforms; bring opposition in from the embattled fringes for a buoyant democracy to take root; Holding a referendum to address President Nkurunziza’s decision to run would give agency to citizens in shaping Burundi’s future. More broadly though, it could help stabilize the Great Lakes region and salvage Nkurunziza’s pledge to the nation in 2005 “always respect the Burundian constitution and the peace agreement.” Only time will tell if President Nkurunziza and the CNDD-FDD can repair a fragmented Burundi. *Source globalriskinsights]]>