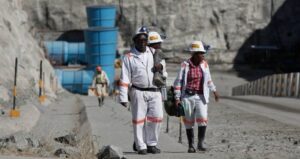 Zimplats will invest €100m updating its Ngwarati smelter in 2015/16. Photo©Philimon Bulawayo/Reuters[/caption] A cabinet reshuffle has calmed the nerves of investors, who plan new and expansion projects. The political temperature in Zimbabwe – scaldingly hot for investors in the country in recent years – has shown no sign of abating. The battle that pitches President Robert Mugabe’s wife Grace against vice-president Joice Mujuru is just the latest instalment in the drawn out succession struggle. But in the mining sector, the government still has a few indigenisation plans to rule on before the companies involved will plough in more money. Recent years have seen the mining industry the target of both scorching rhetoric and legal action. The 2010 indigenisation law called on international companies to transfer a 51% stake to local investors. In 2012, the largest platinum miner in the country, Implats, finally agreed to what it called the “minimum requirements” of the policy. The International Monetary Fund, which in July re-opened its office in Zimbabwe, says the clarification of black economic empowerment laws is necessary before any resumption of bilateral lending. Since incendiary indigenisation minister Saviour Kasukuwere was replaced in a cabinet reshuffle in September 2013 and Patrick Chinamasa became finance minister, relations with the large mining houses have improved. Enough, indeed, for the prospect of fresh investment: South African miner Aquarius Platinum has announced a $40m expansion programme for 2015. It will involve investing in the Mimosa mine, which it owns with Implats, to prolong its lifespan for 20 years. Mimosa Mining says revenue was up 4% in the quarter ending September 2014, reaching $82m, with both production and head grade up 1% to 655,034tn and 3.64g/tn, respectively. Meanwhile, Toronto-listed Caledonia Mining said in November that it is planning a $70m investment in its Zimbabwe subsidiary Blanket mine over the next five years. Caledonia will use the funds to expand an existing gold mine and improve mine-related infrastructure. A $3bn Russian platinum project also broke ground in September some 50km north-west of the capital. So will we see a further influx of cash in the min- ing sector? Much depends on the squabbles at the top, but the wind may be turning. ●