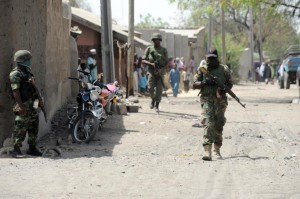 Kano (Nigeria) (AFP) – Suspected Boko Haram militants have seized a military base outside the Nigerian town of Baga near Lake Chad after engaging troops in a fierce battle that lasted several hours, witnesses said on Sunday.

“They (the militants) overwhelmed the troops and forced them to abandon the base which the gunmen took over,” local resident Usman Danssubdu told AFP after fleeing to neighbouring Chad following Saturday’s raids.

The base is used by the Multinational Joint Task Force (MNJTF), which was established in 1998 to battle cross-border crime but whose mandate was expanded to fighting Boko Haram when the Islamist group emerged.

The force is made up of troops from Nigeria as well as Niger and Chad.

Hundreds of fear-stricken residents from Baga and five other Nigerian towns and villages have poured into neighbouring Chad to escape Boko Haram raids on their homes on the shores of Lake Chad, witnesses said.

Residents of Kauyen Kuros, Mile 3, Mile 4, Baga, Doron-Baga and Bundaram fled across the lake in fishing boats and canoes into Chad following hours-long attacks on Saturday by hundreds of militants from the Islamist group.

“We are now seeking refuge in Gubuwa, Kangallam and Kaiga villages inside Chad near the border with Nigeria,” Dansubdu told AFP by telephone from Gubuwa.