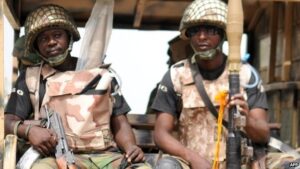 Nigeria does not need the help of UN or African Union troops to take on Boko Haram, the country’s national security adviser has told the BBC.

Sambo Dasuki said Nigeria, and its neighbours were in a “good shape” to take on the insurgents. But he acknowledged the group, which is fighting to create an Islamic state, were a “real security threat”. Meanwhile US Secretary of State John Kerry says he plans to visit Nigeria in a couple of days. Mr Kerry made the announcement in a speech discussing how to tackle violent extremism at the Davos economic conference. Since the Nigerian government declared a state of emergency 20 months ago in three north-eastern states to deal with the insurgency, Boko Haram has strengthened and now controls several towns, where it has declared a caliphate. The militants gained worldwide notoriety after kidnapping more than 200 schoolgirls in April last year – who have yet to be rescued. Recently they have carried out raids into neighbouring Cameroon and this week Boko Haram’s leader said his fighters had carried out the brutal attacks on the Nigerian town of Baga. He said they had seized enough weapons from Baga’s military base to “annihilate Nigeria”. Some reports said that as many as 2,000 people died in Baga but Nigeria’s government has disputed this, putting the toll at 150. Mr Dasuki told the BBC’s Newsday programme that close to 50% of Nigeria’s army was now deployed to the north-east, which he said showed how seriously the situation was being taken. However, several soldiers have complained about not being given enough weapons and working equipment to tackle Boko Haram. Mr Dasuki has dismissed such criticisms, saying there were “cowards” within the armed forces who hampered the campaign against the insurgents. When asked if Nigeria needed outside help, he said “No”, before saying it was an option to involve UN and AU forces, but regional partners were best placed to deal with the problem, Nigerian soldiers currently make up the bulk of UN peacekeepers deployed to Africa, the security chief has said. Correspondents say so far the regional fight against Boko Haram has been ineffectual. Efforts to form a multinational force involving Nigeria, Niger, Chad and Cameroon have floundered. However, following a meeting this week it was agreed that they would seek UN backing for the force – and move the headquarters from the captured town of Baga to Chad’s capital, N’Djamena. Over the weekend, Chadian soldiers deployed to Cameroon’s border with Nigeria to help secure the porous border. *Source BBC]]>